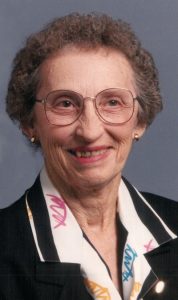 A funeral service for Evelyn Rademacher will be held at 2:00 p.m. Saturday, November 3, 2018 at Hauser Funeral Home in Charles City. Pastor Russ Leeper from Saint John Evangelical Lutheran Church in Charles City will officiate. Burial will be at Oakwood Cemetery in Floyd.

A gathering of family and friends will be held one hour prior to the funeral service on Saturday at the funeral home.

Evelyn Cleone Starbuck, the daughter of Vernon and Myrtle (Michael) Starbuck, was born February 9, 1926 near Bassett, Iowa. She received her education in Floyd, graduating from Floyd High School in 1943. She worked at F. W. Woolworth in Charles City as a clerk and at the Oliver Company. Evelyn was united in marriage to Eldon Rademacher on August 19, 1945 at the Little Brown Church in Nashua. They proudly celebrated their 70th Anniversary together and came to be winners of the longest married couple at the annual celebration held at the Little Brown Church.

Evelyn loved farming with Eldon on their farm west of Floyd, raising large gardens, and was a “true farm wife” in every aspect. Evelyn and Eldon bowled for almost 40 years, gathered to play “500” for 50 years with the couple’s card club and loved to travel throughout the United States.

She was preceded in death by her parents; husband, Eldon on April 14, 2016; and two brothers.