WORTH COUNTY – Three Mason City men were caught in Worth county recently, cruising the backroads in erratic fashion with a needle, pills and a loaded methamphetamine pipe, police say.

On October 2, 2018 at approximately 2:05 AM, a deputy with the Worth County Sheriff’s Office conducted a traffic stop on a Black 2001 Pontiac Grand Prix on Highway 105 at the intersection of Mallard Ave for driving erratically. Daniel Dozier, age 34 of Mason City was identified as the driver of the vehicle and 19 year old Travis Ulrich and 27 year old Felix Arp (both of Mason City) were identified as passengers in the vehicle.

As a result of the investigation, an unused hypodermic needle, loaded methamphetamine pipe, and pills were recovered from within the vehicle.

Dozier was placed under arrest for no insurance, possession of drug paraphernalia and possession of a controlled substance and subsequently transported to the Worth County Jail for further processing.

While alone in the booking room of the jail, the sheriff’s office says, deputies observed on camera Dozier placing a plastic baggie in his pants. Deputies then retrieved the plastic baggie and it contained a green leafy substance consistent with marijuana with an odor of marijuana. He was charged with no insurance, possession of drug paraphernalia (Simple Misdemeanor), possession of a controlled substance 2nd offense (methamphetamine)(Aggravated Misdemeanor) and possession of contraband in a correctional facility (Class D Felony). All suspects are innocent until proven guilty in a court of law.

Dozier once frightened Mason City’s former Mayor during an attempted burglary, leading to a call to police, a chase, and Dozier’s arrest on burglary charges. 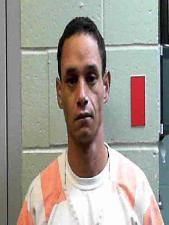 8 Responses to Mason City men nabbed in Worth county with needle, pills and “loaded meth pipe”