This news story was published on September 27, 2018.
Advertise on NIT • Subscribe to NIT 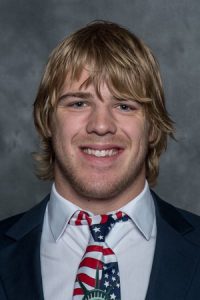 The award is sponsored by the National Football Foundation and recognizes an individual as the absolute best football scholar-athlete in the nation.

Benton, a native of Van Meter, Iowa, is the epitome of the student-athlete.

Benton has excelled on and off the field in his five years as a Cyclone, earning First-Team Academic All-Big 12 honors twice in his career. He graduated with honors in 2018, earning a degree in accounting and finance with a 3.80 GPA.

Benton, who was placed on scholarship for his final season as a Cyclone, has also been a dependable player on ISU’s stout defensive front. He’s played in all three games this season, registering two tackles. He has 34 tackles, 3.5 TFL and 2.0 sacks in his career.

Benton is wearing No. 58 this season in honor of former assistant coach Curtis Bray, who passed away in 2014.