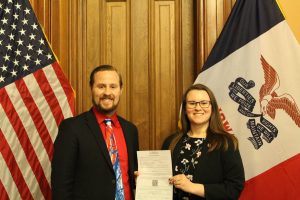 Janssen says, ” We must protect the individual rights of those who cannot protect or provide for themselves…whether it be free market options for education for the next generation of Iowans, passing legislation that enables non-profits to care for children in need prior to the occurrence of abuse or trauma, and DHS and foster care reform.” Jeff also promises to be accessible and responsive to all of his constituents. He believes a Representative should be accountable for the work performed on behalf of the people. He will consider and move forward commonsense ideas and solutions regardless of party affiliation of the individual making the proposal.

Janssen is a founding partner at Janssen Law, PLC. Jeff was born in Des Moines, Iowa in 1987 and has been a Des Moines native ever since. He received his undergraduate education at Drake University, with a Bachelor of Arts degree in both Accounting and Entrepreneurial Management and a concentration in Law and Business. He received his Juris Doctorate from the Drake University Law School with concentrations in Business Law, Legislative Practice, and Public Service. He is a founding partner at Janssen Law, PLC practicing in the areas of adoption, divorce and family law, lobbying and government relations, bankruptcy and creditor representation, estate planning, wills and trusts, business, contracts, and corporations. He is a member of the Federal Bar Association, the Iowa State Bar Association, and the Polk County Bar Association. As a member of the Janssen Law firm, he believes in fast, professional, and cost-effective advocacy for his clients. He is also on the Board of Directors of Families United Action Network (FUAN) which is the leading family law reform organization in the state of Iowa and serves on the Board of Directors of Safe Families.

Janssen favors smaller government which he says means less government interference and regulations for everyday Iowans, protecting the individual rights and liberties of all Iowans, including the unborn; and creating a fairer judicial system that levels the playing field at the onset of each and every case. As a husband and father of 7 (3 biological, 2 foster, and 2 adopted children), Jeff lives what he professes.