MASON CITY – A man wanted on a number of charges including illegal drugs and weapons as well as felony theft was nabbed by police at a Mason City gas station.

An alert Mason City police officer spotted Nicholas Joseph Lamb at the Yes Way, 418 South Federal, on the afternoon of February 14. “An officer saw Lamb and knew that he was wanted,” a police spokesman told NIT. Lamb was wanted on charges out of Floyd county, including possession offensive weapons, illegal drug possession and theft.

Lamb is also due in court to face a felony theft charge brought by Waterloo police back in 2016. He is a convicted felon out of Pottawatamie county for burglary. 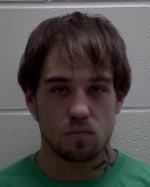