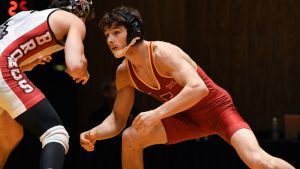 IRVING, Texas – The Big 12 Conference announced today that Iowa State’s Ian Parker was named the conference’s wrestler of the week. Parker becomes the first Cyclone to earn this honor since Lelund Weatherspoon won on Feb. 1, 2016.

After bumping up a weight class to 141 pounds, Parker went 2-0 last weekend. He picked up a 4-2 decision over Oklahoma’s three-time NCAA qualifier, No. 26 Mike Longo and then toppled Oklahoma State’s two-time national champion, No. 4 Dean Heil, 3-1.

In his upset bid in Stillwater, Parker was tied with Heil 1-1 after the pair traded escapes in the second and third periods. With a minute left in the match, Parker connected on a shot and finished for the go-ahead takedown.

The Saint John’s, Mich., native wrestled the first three months of the season at 133 pounds, compiling a 15-6 record.

The Iowa State wrestling team will travel north this weekend to take on North Dakota State and No. 12 South Dakota State. The Cyclones will face the Bison on Friday night at 7 p.m. and wrap up the weekend with a contest with the Jackrabbits on Sunday at 1 p.m.