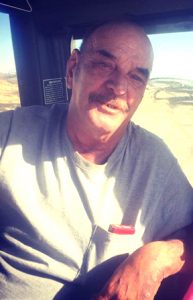 Louis Bouillon, 63, of Charles City, passed away Thursday, December 7, 2017 at home surrounded by his loving family.

A funeral service for Louis Bouillon will be held at 10:30 a.m. Tuesday, December 12, 2017 at Hauser Funeral Home with Pastor Paul Phillips of Gospel Lighthouse Church of Floyd officiating. Burial will be at Riverside Cemetery in Charles City.

Visitation will be at Hauser Funeral Home in Charles City from 5:00 to 7:00 p.m. Monday, December 11 and will continue one hour before the funeral service on Tuesday.

Louis worked in construction, worked at the Marble Rock Coop, and worked for farmers. He was also a truck driver for Heartland, Carlson’s, and Rausch Bros. Louis loved horses and ponies and did chuck wagon racing. He also enjoyed fishing and spending time with his family and grandkids.