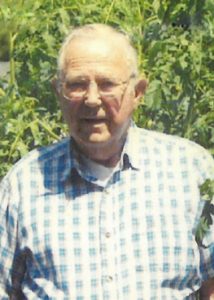 Ralph Barker, 89, of Charles City, passed away Friday, November 24, 2017 at the Muse Norris Hospice Inpatient Unit in Mason City, Iowa with his family by his side.

A funeral service for Ralph Barker will be held 2:00 p.m. Wednesday, November 29, 2017 at Hauser Funeral Home in Charles City with Pastor Wendy Johannesen from Floyd Grace and West St. Charles United Methodist Churches officiating. Burial will be at Oakwood Cemetery in Floyd.

Visitation will be one hour before the service at the funeral home on Wednesday.

Ralph Lavern Barker, the son of Raymond and Lillian (Harold) Barker, was born April 5, 1928 in Sharpsburg, Iowa. He attended country school in Taylor County and helped on the family farm. Ralph was drafted into the United States Army and proudly served his country for two years while stationed in California. On August 10, 1951, he was united in marriage to Luella Maudlin in Redding, Iowa.

The couple remained in California for an additional year after Ralph’s honorable discharge before moving to southern Iowa where Ralph farmed for ten years. They moved to Indianola and he worked at Sears in Des Moines for about seven years, moved to Winterset and managed a motel for three years, moved back to Indianola where they purchased another motel. In 1972, they traded that motel for the Heart Court Motel in Charles City and owned that for about five years, bought and managed a mobile home park in Montezuma for another five years and finally moved back to Charles City. Ralph also drove for Winnebago from 1973 to 1979 and a few years later as well for a total of about eight years.

Ralph enjoyed wood working, remodeling their home and gardening (especially his tomato plants which would grow about eight feet tall).

He was preceded in death by his parents; and three brothers: Pearl, Ivan and Lawrence Barker.