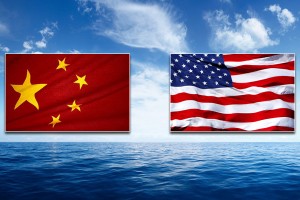 WASHINGTON, D.C. – Today, the U.S. Department of Commerce says that due to the NAFTA trade deal, U.S.-produced parts in imported goods from Mexico and Canada are declining, while China is gaining ground.

According to the U.S. Department of Commerce, “it has been widely assumed that American-made parts and components constitute a substantial percentage of the products that are manufactured in Mexico and Canada and imported by the United States,” but, the agency says, “that is increasingly not the case.”

According to a bulletin released today from the commerce department:

Analysis of newly released “value-added” data from the Organization of Economic Cooperation and Development (OECD) shows that the share of U.S.-produced content in manufactured imports from Mexico and Canada has eroded significantly since the mid-1990s.

The share of U.S.-produced content incorporated in manufactured goods imported by the United States from Mexico was only 16 percent in 2011, down from 26 percent in 1995, the first year for which the data are available.

“The declining share of American parts and components in imports from Mexico and Canada is all the more reason for us to take a fresh look at NAFTA,” said Commerce Secretary Wilbur Ross. “The assumption was that American manufacturers of intermediate goods were big beneficiaries from trade with NAFTA, but with their share declining, American companies are not benefiting nearly as much as once believed. Even more alarming is the fact that the most recent data available on value-added in trade is only through the year 2011. The trend of Mexico and Canada using more non-U.S.-made parts and components may mean even more bad news for American producers.”