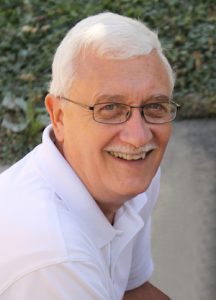 Services for Mike Schear will be held at the Trinity United Methodist Church on Saturday, September 9, 2017. A visitation with family and friends will be from 9:30 a.m. until the start of the memorial service at 11:00 a.m. with Pastor Jim Beranek officiating. A private family inurnment will be at a later date at the Iowa Veterans Cemetery in Adel, Iowa.

Michael John Schear was born December 23, 1947 in Hampton, Iowa to Donald and Dolores (Price) Schear. Mike graduated from Hampton High School in 1966. Following graduation, he attended NIACC in Mason City before joining the United States Navy. Mike was stationed state side during the Vietnam War, and was proud to serve his country. On August 1, 1970, he was united in marriage to Marlene Orr at the Methodist Church in Hampton. Mike continued to serve in the Navy until his honorable discharge.

Mike completed his education at NIACC, and he and Marlene started their family with the birth of their son, Chris while living in Mason City. He worked for Avco Financial Services in Des Moines for one and a half years before transferring to Charles City in 1975. He continued to work for Avco until he was asked by the Credit Union in Charles City to become the President/CEO in 1978. Mike continued working at the Credit Union for 34 years until his retirement in 2012.

Mike loved his job at the Credit Union, and took great pride in protecting other people’s money and the integrity of the Credit Union. At his retirement, Mike said that he was going to miss the community he served and the employees he had the honor working with more than the job itself. He was an honest, fair and straight-forward guy who loved what he did.

Mike was an active member of the American Legion and served on several committees in the Charles City community. He also volunteered countless hours for well-deserving organizations. Mike enjoyed fishing, gardening, working in his yard, fixing up his old cars and attending antique car shows with family and friends. He loved spending quality time with his family, especially all of his grandchildren.

Mike is survived by his wife of 47 years, Marlene; son, Chris (Jami) of West Des Moines; grandchildren: Alex, Zach, Emma and Jenna; brother-in-law and sister-in-law, Richard (Sheryl) Orr of Warrensburg, Missouri; along with many nieces, nephews, other family members and friends.

He was preceded in death by his parents, Donald and Dolores Schear; sister, Cindy Bejarano; and sister-in-law, Mavis Mutschler.

In lieu of flowers memorials may be directed to the family.