CHARLES CITY – A Mason City man was arrested in Charles City for assaulting a peace officer.

On July 15, 2017 at about 6:30 PM, officers with the Charles City police department responded to the 800 block of Wisconsin Street for a possible assault. After an investigation, officers arrested 21-year-old Bounus Otto
of Mason City for assaulting a peace officer, a serious misdemeanor.

Otto was jailed and given a public defender. He will face an August 2 hearing. 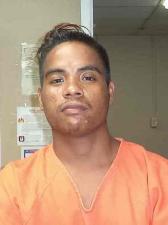