MASON CITY – A Mason City man has been sent to jail for drunk driving.

Todd Allen Bitker, age 51, was stopped and arrested by Mason City police on May 16, 2017 for first-offense operating while intoxicated. After a guilty plea in June, Bitker was sentenced to two days in jail and $1,890.50 in fines and court fees.

Bitker was released from an Iowa prison last year after a felony drug conviction. 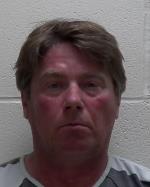