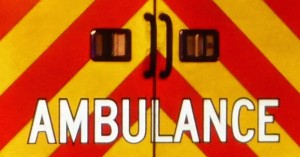 SPIRIT LAKE, IOWA – An Arkansas man was riding a bicycle in Sprit Lake, Iowa when a driver ran him down.

On June 24th, 2017 at around 10:54 AM, the Dickinson County Sheriff’s Office responded to a personal injury accident involving a bicyclist.

James Heim, age 68 of Spirit Lake, was eastbound on 215th Avenue in a 2000 Chevrolet Silverado when he struck a bicyclist in the roadway. Heim did not see the bicyclist until it was too late.

The bicyclist was Gerald Zelinsky (79), of Hot Springs Village, Arkansas. Zelinsky was suspected of serious or incapacitating injuries. He was transported to Lakes Regional Healthcare and later flown to Sioux Falls. Heim was uninjured.

Heim was cited for fail to stop within assured clear distance.

Heim was not participating in the University of Okoboji Campus Bike Ride.
The DCSO was assisted by the Dickinson County Emergency Management, Okoboji Police Department, Spirit Lake Fire Department and First Responders, and the Lakes Regional Healthcare Ambulance.