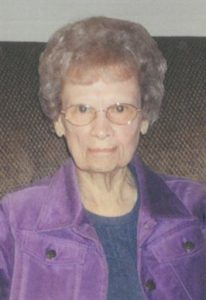 A funeral service for Mary will be held 10:30 A.M. on Wednesday, March 22, 2017 at Saint John Evangelical Lutheran Church in Charles City with Pastor Bill Odermann officiating. Burial will follow at Riverside Cemetery in Charles City.

Visitation will be held from 5:00 P.M to 7:00 P.M on Tuesday, March 21 at Hauser Funeral Home and one hour prior to the service at the church on Wednesday.

Mary Grace Eckhoff, daughter of William and Lydia Whitman Aird was born October 4th 1921 in Orchard, Iowa. Mary attended Floyd and Charles City schools. She graduated from Charles City High School in 1939. In her early years she worked for the superintendent of Charles City schools, Gem Movie Theater and the Wildwood Golf Course.

Mary was united in marriage to John Eckhoff Jr. on January 28th 1941. They farmed for 33 years in the Nashua – Greene area. After they left the farm and moved to Charles City, Mary worked for the Lamplighter Motel for 10 years.

She was a member of Saint John Evangelical Lutheran Church, Royal Neighbors, Birthday Club and participated in a neighborhood 500 card club for 50 years. Mary loved her garden plants; especially geraniums. She also loved to dance and as a Cubs fan, got to see the Cubs play at Wrigley Field.

She was preceded in death by her husband Johnny in 1996; son: Dennis; grandson: Brad; one great-grandchild; two brothers; and four sisters.