This news story was published on September 26, 2016.
Advertise on NIT • Subscribe to NIT 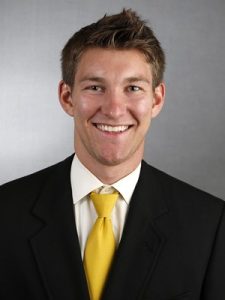 IOWA CITY – University of Iowa senior punter Ron Coluzzi has been named Big Ten Conference Special Teams Player of the Week for his performance in Iowa’s 14-7 win at Rutgers.

The weekly honor is the first for the graduate transfer who is in his first season with the Hawkeyes. Coluzzi (5-11, 182-pounds) is a native of Naperville, Illinois, who previously played at Central Michigan.

In Iowa’s win over Rutgers, Coluzzi averaged 42 yards on seven punts, with a long of 55 yards. Four of his kicks were placed inside the 20, as Rutgers recorded zero yards on just one return. Coluzzi also had recorded touchbacks on all three of his kickoffs, allowing no returns.

Through four games, Coluzzi is averaging 43.2 yards on 20 punts, with Hawkeye opponents recording just two returns for zero yards. He has five punts of 50 yards or more, with just one touchback, and opponents have 15 fair catches. Coluzzi has also recorded 18 touchbacks on 22 kickoffs.

Coluzzi is the second Hawkeye to be honored in 2016, as redshirt freshman Anthony Nelson was named Big Ten Freshman of the Week following Iowa’s opening win over Miami, Ohio.