Kaitlin Elise Modderman, age 23, was arrested by Clear Lake police back on March 18, 2016, in connection to a traffic stop. Modderman was charged with second-offense operating while intoxicated and felony possession of marijuana with intent to deliver along with possession of drug paraphernalia and speeding.

In April, Clear Lake police applied for and were granted a search warrant for Modderman’s Galaxy S5 mobile phone.

Own a plea deal arrangement, Modderman was given a deferred judgement in the felony drug case and pleaded guilty to the drunk driving charge. She must pay $2,721.25 in fines and court fees, spend 14 days in jail with work release, serve 5 years of probation and submit a DNA sample. She still faces a trial in the possession of drug paraphernalia and speeding charges. 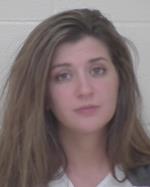