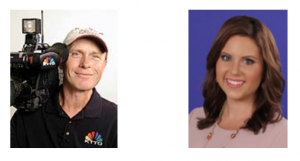 MASON CITY – Two news people from Minnesota were laughed at and mocked for interrupting a recent, major news conference held in Mason City.