This news story was published on August 27, 2015.
Advertise on NIT • Subscribe to NIT 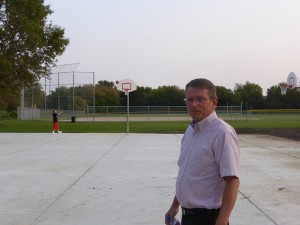 The Georgia Hanford Park is Mason City’s largest park by land size, Mr. Watts said Wednesday as he showed off the new basketball court that was installed there this summer. He said it’s only fitting that the park get the equipment and amenities it needs so people can fully enjoy it.

Watts has led a fundraising campaign for a number of years to benefit the park and the surrounding area. Once funds are raised, he works with city staff and others to see each project through. In recent days, a 6-hoop basketball court area was fully installed. Also, play equipment for younger kids was installed.

These upgrades join the renovated ball diamond and lights near the shelter house and playground area.

Mr. Watts says the big upgrade he is seeking is a second shelter house.

Posted by NorthIowaToday.com on Thursday, August 27, 2015

Posted by NorthIowaToday.com on Thursday, August 27, 2015