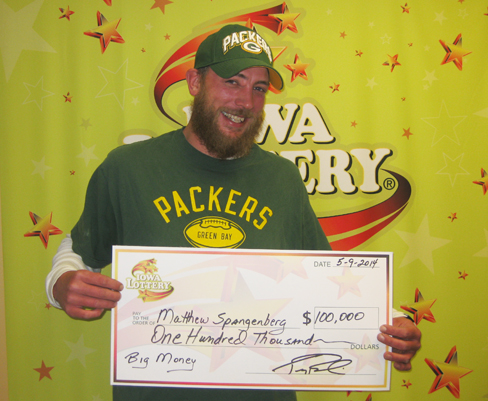 DES MOINES – A North Iowa man purchased some instant-scratch tickets on a suggestion from a co-worker and ended up winning a $100,000 top prize.

Matthew Spangenberg of Hampton and a co-worker stopped at Casey’s, 702 E. Gilman St. in Sheffield, before work Friday morning and bought some scratch tickets. Spangenberg, 34, said he scratched off his “Big Money Multiplier” ticket inside the store and knew he had won big.

“There was like five or six people in the gas station and I’m jumping for joy,” he said. “I knew right away.”

Spangenberg said it has been several months since he last played a lottery game, but his co-worker suggested that they play a scratch ticket before work.

“It’s been at least six months since I bought a scratch ticket and then sure enough I spend 10 bucks this morning and I won,” Spangenberg told lottery employees as he claimed his prize Friday at the lottery’s regional office in Mason City.

Unfortunately, the co-worker didn’t win a prize on his scratch ticket, Spangenberg said.

“He put his head down, said, ‘Congratulations,’ and went to work,” he said.

Spangenberg works at Sukup Manufacturing in Sheffield. After winning a big lottery prize, Spangenberg said he took the day off work and immediately called everyone he knew to share his good news.

“I called everybody at 5:30 in the morning and woke them up,” he said.

Spangenberg said he hasn’t decided yet how he’ll spend his winnings. House repairs and a new vehicle are strong possibilities, though.

“It’s a terrible problem,” he said. “I have to spend a lot of time figuring out how I’m going to spend that much money.”