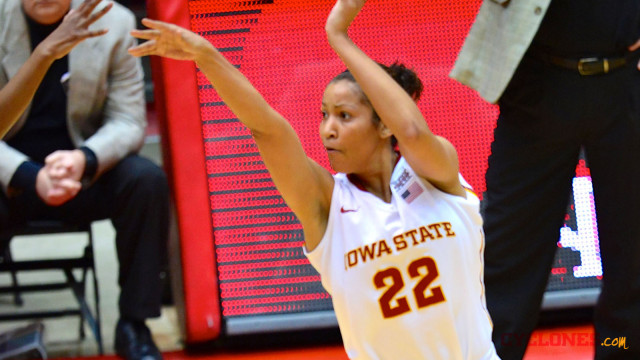 In the first half, it was Williamson who was hot from long range as the junior guard netted three 3-pointers to lead all scorers with nine points on 3-of-6 shooting.

Iowa State and TCU would stay neck-and-neck for much of the first half with ISU grabbing the largest lead of just six points. The Cyclones would also record five first-half takeaways and grab 14 points off turnovers to take a 28-23 halftime lead.

The Horned Frogs would battle back to take as much as a six-point lead with 14:50 left in the game, 40-36. From there the game went back and forth, featuring15 lead changes.

With 1:08 remaining and ISU down by one, Seanna Johnson netted a 3-pointer to put Iowa State up 58-56. Johnson would come to the rescue again as she netted two free throws on a 1-and-1 with just 17.7 seconds left on the clock to give ISU a 60-58 lead.

TCU took the ball at mid-court with 15.9 left on the clock and passed it around the perimeter before Breaux found an opening at the top of the key and bombed the game-winning 3-pointer. Nikki Moody drove down the court and into the lane, but a jump ball was called between Moody and Chelsea Prince. TCU had the arrow and the ballgame with 0.3 seconds left.

Three-point shooting was a key to the game. Iowa State kept up with the Horned Frogs via some impressive shooting from beyond the arc. Not wanting to intervene too much with the Big 12’s leading blocker in TCU center Latricia Lovings, the Cyclones fired away from deep. ISU finished 11-of-13 from deep, led by Williamson’s 6-of-13 shooting from deep.

TCU did not do much from deep, shooting 2-of-11 from 3-point range. However, Breaux made the shot that counted, allowing the Frogs to leave Ames with the victory.

Cyclone junior Brynn Williamson left her shooting slump behind as she tied a career-high with six 3-pointers. Williamson would finish the night 6-of-14 from the field and 6-of-13 from downtown to pace the Cyclones. Tonight was the eighth game this season the St. Louis, Mo. native had netted three or more threes.