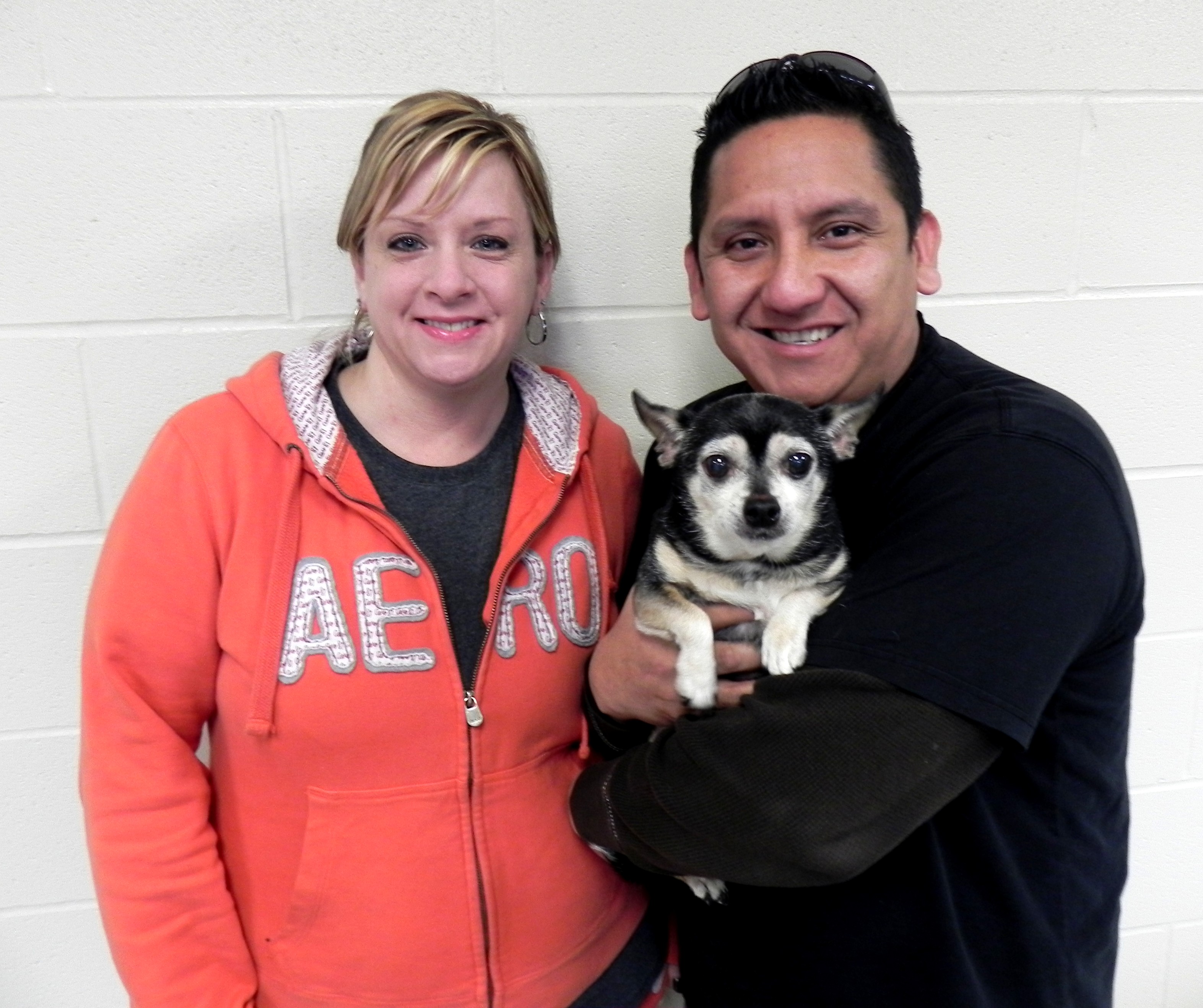 MASON CITY – A 12 year old Chihuahua named Moses has had quite the journey that ended recently with his owner, John Arboleda, driving across the country overnight from New York, to reclaim him from the Mason City Stray Animal Shelter.

The exciting story begins a few months ago in Long Beach, New York, where Moses was living with John’s ex-wife and son. But on October 29th, Hurricane Sandy hit the east coast and Long Beach was one of the hardest hit areas. Moses’ family had to evacuate and Moses went to live with John in Brooklyn. However, John’s landlord didn’t allow pets, and gave them until the 1st of the year to find a new home for Moses.

At the end of the year, John and his girlfriend Pam Latch took an extended vacation to visit his family in Texas and her family in Iowa; Moses accompanied them. While visiting Pam’s daughter in Mason City, IA, she offered to keep Moses for them since their landlord would not allow Moses to return. After a tearful farewell to Moses, John and Pam returned to Brooklyn.

On February 20th, an elderly Chihuahua was picked up as a stray by Animal Control in Mason City. The dog was brought to the Mason City Stray Animal Shelter, which is managed by the Humane Society of North Iowa. The dog was scanned for a microchip and was discovered to have one. However, the information on the microchip was out of date and the phone numbers registered to the dog were no longer in service. A name had been registered to the dog though. Shelter staff used Google and Facebook to search out the name associated with the dog and sent an e-mail message through Facebook to a person with a matching name knowing it was a long shot that this might be their dog.

Later on that afternoon, the Humane Society of North Iowa received a phone call from John Arboleda. The e-mail that was sent through Facebook was to his ex-wife and she made contact to let him know the situation. The elderly Chihuahua that was picked up as a stray in Mason City was his dog Moses. Moses’ microchip information had been registered 11 years prior in his ex-wife’s name.

As soon as it was confirmed, John and his girlfriend Pam left Brooklyn at 4:00 pm on Wednesday afternoon and drove the 1200 miles straight through the night to arrive in Mason City, IA, at noon on Thursday to reclaim Moses. The reunion was joyous for both the owner and dog.

“It was amazing to see this happy ending take place,” said Sybil Soukup, Executive Director of the Humane Society of North Iowa. “It took a lot of tracking on our part and a lot of driving on John’s part, but well worth the effort. This kind of story is the reason why we encourage people to microchip their pets; the Humane Society of North Iowa offers this service for a very reasonable price”

John and Pam plan to visit family in the area for a few days and then will make the 1200 mile trek back to Brooklyn; this time with Moses in tow. A friend of the family will care for him temporarily while they change their living arrangements to find housing that allows pets.

“When I got Moses microchipped almost a dozen years ago, I never thought I would have to use the service,” said John. “Today, I am beyond grateful I had it done. I’m so happy to have my dog back.”