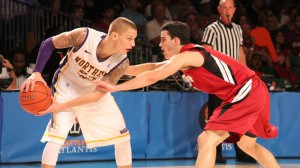 PARADISE ISLAND, Bahamas – The University of Northern Iowa dropped a 66-50 decision to the Stanford Cardinal in the consolation semifinals of the 2012 Battle 4 Atlantis in Imperial Arena on Friday.

“After our slow start we fought hard to tie it up at the half,” UNI head coach Ben Jacobson said. “We fought hard in the second half but we dug ourselves a hole too many times.”

Stanford started the second half on an 8-0 run and the Cardinal would not relinquish the lead the rest of the way, but it was not easy.

UNI cut the Cardinal lead to 47-44 on a layup from sophomore forward Seth Tuttle. Stanford’s Andy Brown scored on the Cardinals’ next possession to push it back to five at 49-44. Koch made one of two free throws to make it a four-point game at 49-45, but UNI would get no closer.

“We got things going offensively in the first part of the second half and our movement was better,” Jacobson said. “We had guys on the floor diving for a loose ball and getting a basket as a result of that. We made the hustle plays. Generally we need to play a little bit better and we will.”

UNI will take on the No. 19-ranked Memphis Tigers in the seventh-place game on Saturday. The game will tip at Noon (CT) and be televised live on AXS.

NOTES: Jake Koch made his first four free throws of the game to extend his consecutive made streak to 20, but missed on his next attempt to snap his streak … UNI and Stanford were tied on the boards with both squads tallying 31 rebounds … Nate Buss led the bench effort with seven points and four rebounds in 18 minutes.

0 0 votes
Article Rating
Subscribe
Login
0 Comments
Inline Feedbacks
View all comments
PrevPreviousFerentz on narrow loss to Nebraska: “They did the better job in the second half”
NextWBB: Cyclones Down Loyola Marymount, 55-33Next