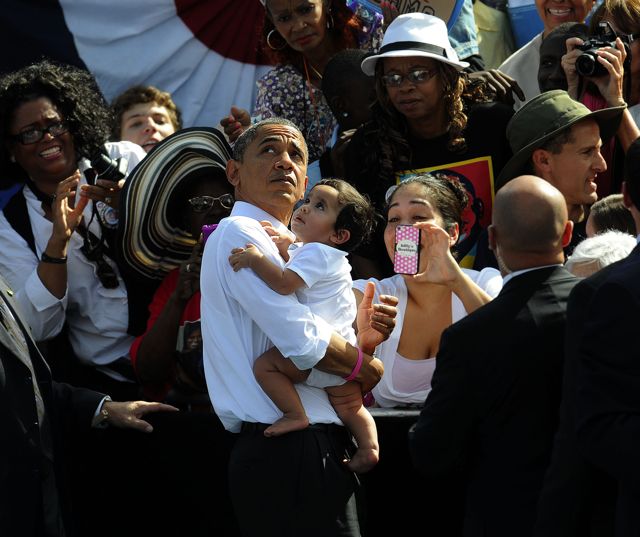 Obama aggressively continued with a familiar line of attack, arguing that Romney has shifted positions on key issues to win voters.

“This is about trust,” a fired-up Obama told a boisterous crowd of about 11,000 in the South Florida city of Delray Beach. “There’s no more serious issue in a presidential campaign than trust.”

Romney supporters criticized the president for answering Romney’s charge of having no second-term agenda by distributing a 20-page pamphlet and a new TV ad with his goals.

“Running to Kinko’s two weeks before an election to copy a glossy pamphlet of repackaged ideas is the act of a desperate campaign, not of a visionary leader,” Republican National Committee Chairman Reince Priebus said in a statement. “America cannot afford four more years like the last four years, but that’s all President Obama offers.”

Romney also introduced voters to three new TV ads Tuesday, including one about the two candidates’ differing visions for the nation.

Obama and Romney participated in the third and final debate Monday night in Florida. The two have no other joint appearances planned.

Polls find voters split on who won the debate, with the president taking a slight edge, though Romney remains ahead in overall national rankings, according to a compilation of surveys by the website Real Clear Politics.

Obama started his day Tuesday with a 20-minute talk at the Delray Beach Tennis Center and stressed that Romney had a case of “Romnesia.”

“We had a severe outbreak last night. It was at least stage three Romnesia,” he said. He recalled how Romney in a 2008 column urged troubled auto companies to declare bankruptcy. “If you say that you love American cars during a debate, but you wrote an article titled ‘Let Detroit Go Bankrupt,’ you might have Romnesia.”

Romney, who’s promoted a more centrist message in recent weeks, has been under fire for softening or changing his views on a number of topics, including policies toward younger illegal immigrants, tax cuts and abortion.

Obama also spoke Tuesday about his newly released agenda, which includes little that hasn’t been proposed before. It stresses classic Obama themes, such as “building an economy from the middle class out” and promising 1 million more manufacturing jobs by 2016, keeping in place the 2010 federal health care law and recruiting 100,000 math and science teachers.

“I’ve laid out a plan for jobs and middle-class security. And unlike Mitt Romney, I’m actually proud to talk about what’s in it, because my plan actually will move America forward,” Obama said. Romney hasn’t specified all the steps he’d take to reduce the deficit by trillions of dollars.

“In two weeks, a majority of Americans will choose Governor Romney’s positive agenda over President Obama’s increasingly desperate attacks,” Romney spokesman Ryan Williams said in a statement. “Mitt Romney has a real plan for a real recovery that will create 12 million new jobs with rising take-home pay, move us toward a balanced budget and create prosperity for all Americans.”