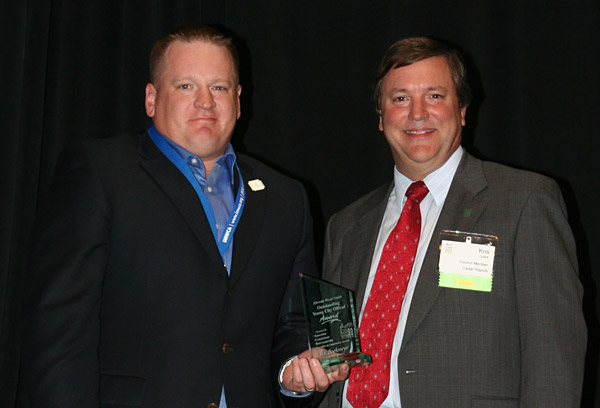 SIOUX CITY – The Iowa League of Cities created the Rhonda Wood Smith Award to recognize exemplary work of young city officials and those new to city government. The intent of the award is to encourage and affirm participation in local government by young people who may make greater sacrifice for public service due to significant career and family commitments.

Mason City Mayor Eric Bookmeyer is the 2012 recipient of the Rhonda Wood Smith Award by the Iowa League of Cities. The award was presented to Mayor Bookmeyer at the League’s Annual Conference & Exhibit held in Sioux City September 26-28.

Four key criteria were used as the basis for evaluation during the selection process.

1. Innovation. The degree to which the individual demonstrates originality in approach or application in solving a community problem. This could be utilization of technology or application of theory and practice in a novel way.He worked to create a new program to assist commercial businesses so they can grow and expand. The project partnered with the John Pappajohn Entrepreneurial Center to run the program. The program rebates a portion of their property taxes to pay for new employees or purchases to expand their business. The program provides opportunities for small businesses that have not been available in the past.

2. Bold leadership. The degree to which the individual demonstrates leadership in overcoming obstacles and taking risks in order to better the community.Eric supported 100% Mason City’s effort to become a Blue Zones Demonstration site community. He rallied community support for the project. We were successful in being chosen as one of four sites in Iowa for this program. He was also part ofthe group that led the charge to conduct our Vision Iowa grant effort. His personal prior involvement to being Mayor had an impact on this project at a grass roots level.

3. Commitment. The degree to which the individual demonstrates commitment tothe community and the state.Many hours spent discussing items with Council members to develop solutions to problems in our City. Eric currently serves on the Legislative Policy Board of theIowa League of Cities. He stresses the importance of decorum at our Council meetings to help provide a good positive image of our community. His dedicationto the community is present every day he comes to work as he challenges us in new ways to make our community better.

4. Sacrifice. The degree to which the individual gives time and talent to better the community.He commits many hours to this position which causes time away from his two young children. He is a quality person that gives of his talent and time. He volunteers for many projects and lends support to countless others.

“I am humbled and honored to receive this award from my peers and colleagues.This award is really a reflection of the smart goal-oriented team, elected and staff,we have surrounding us inside city government and our partners within Mason City. I love my wife… I can’t believe she kept this secret for so long. I was stunned when I realized they were talking about our accomplishments. She didn’t even tell Anders or Elsa… they would have told me.”

Eric attended Luther College receiving a BS degree in Biology. Eric worked for the Iowa DNR for a period after college but decided to return to school. He attended St. Ambrose University receiving a MBA at the completion of his schooling. Eric owned a small business for a period of time but his most recent work experience was as an executive recruitment specialist in the door and window industry.