Iran president: Israel short-lived in region, will be eliminated 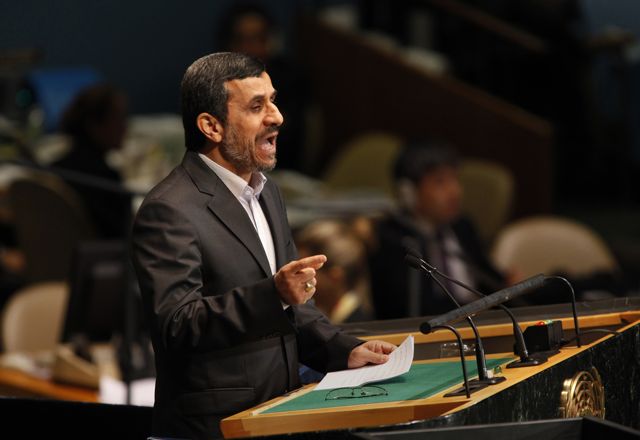 UNITED NATIONS — Iranian President Mahmoud Ahmadinejad said Monday that Israel is only a short-lived presence among the ancient civilizations of the Middle East and eventually would be “eliminated.”

Speaking to a group of journalists in New York ahead of this week’s United Nations General Assembly session, Ahmadinejad said Israel has existed “during a historical phase” to create “minimal disturbances that come into the picture and then are eliminated.”

Israel has been in the Middle East for only 60 to 70 years “with the support and force of the Westerners,” and Iran has existed for 10,000 years, he said.

He also dismissed Israel’s warnings that it was close to unleashing an air attack on Iran to destroy the nuclear complex that Israel and many other countries believe is seeking to develop nuclear bomb-making capability.

“Fundamentally, we do not take seriously the threats of the Israelis,” Ahmadinejad said, according to the Reuters news agency. “We have at our disposal all the means to defend ourselves.”

He also minimized the impact of international sanctions on Iran, saying they are “not that bad.” Iranian leaders have varied in their comments on the economic sanctions, sometimes complaining they are harsh and at other times minimizing their impact.

Ahmadinejad’s angry charges have become a routine part of the U.N.’s General Assembly meeting week. They are delivered each year in multiple media appearances and in his remarks from the assembly podium, which will come Wednesday.

This year his comments may have slightly more weight, because of Israeli warnings that it may bomb Iran at any time to prevent it from finally reaching nuclear weapons capability. U.N. Secretary-General Ban Ki-moon warned world leaders not to indulge in inflammatory language this week, a caution Ahmadinejad ignored Monday.

Israeli leaders have argued that they would be entirely justified in attacking Iran because of the repeated comments of Iranian leaders such as Ahmadinejad. The Iranian president in 2005 called Israel a “tumor” that would one day be wiped out.

Despite his complaints about the United States, Ahmadinejad said Iran wants to continue negotiations over its nuclear program.

“We are not expecting a 33-year-old problem between the United States and Iran to be resolved in a speedy fashion. But there is no other way besides dialogue,” Ahmadinejad said.