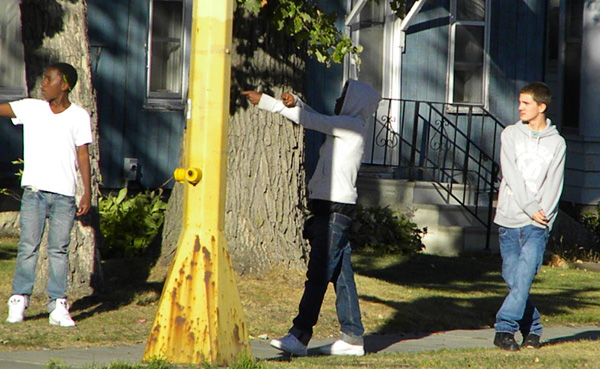 “It involved several subjects, 6-7 males in late teens, no weapons seen.  We had 5 officers and a Supervisor on the scene,” Sgt. Scott said.

“They dispersed.  Half went one way, half went the other way.  It was people not getting along.”

Sgt. Scott said later at 6:38 PM police responded to a call about harassment in the same area but “it may not have been related.”

Sources, however, told NIT that Mason City Police officers had been at 909 and 914 North Federal six times because of the fighting, not necessarily all on Sunday.  A source that was at the location said, “The police officers said if they had to come back one more time, they’d take everybody in.”

Police officers were sitting down the block Sunday evening, watching.

Sources told NIT that the feud started the day before over two dogs.  Dogs from each house “were sniffing each other,” said the source.  It was said that the situation escalated from there and became more serious.

“There were three boys (hanging out at) the 909 residence that attacked a pregnant woman at Casey’s on Saturday,” NIT was told.  A male teen punched a woman in the mouth and another male teen “bought a squirt gun at Casey’s and threatened and aimed the gun at (the woman) and said, “I’m going to shoot you, you f****** b****.”  Her name and address won’t be published.

The source also informed, “There haven’t been any arrests, pending viewing of the Casey’s video tape.”

Witnesses said the male teens on Sunday were calling the woman extremely derogatory names in front of police.

No arrests were made, as Sgt. Scott said “no one would come forward with anything, there was no victim.”

Another man who lives just a few doors away said that the two groups of teens and other adults “were having a yelling match across the highway.”

He said “it took more than an hour for every one of (the police officers) to leave.

“We had issues with (some of the people involved Sunday) on both Friday and Saturday nights which escalated into them bringing an adult male into the mix that stood in Casey’s doorway and yelled at me 3 or 4 times, “Shut up, b****!”

The man went on to say that he and his group dealt with the situation in their own way.

“Saturday, I ended up with an impromptu party on my porch that consisted of 12 friends, a keg, and various firearms. A very nice tactical 12 gauge was being passed around for everyone to check out. Amazingly enough, all of the hoodrats left the immediate area and never returned to Casey’s before they close.”