This news story was published on September 17, 2012.
Advertise on NIT • Subscribe to NIT

MASON CITY – A Mason City man is being held in the Cerro Gordo County Jail on charges that he violated a civil no-contact order.

Jeremy Joe Barragan, 22, is charged with violating the no-contact order which was signed on July 30, 2012 after a domestic situation at a Mason City house which Mason City police are investigating at this time.

Barragan is also waiting to see a judge on September 17th at 3 PM after Mason City police charged him with possession of drug paraphernalia after a September 4th, 2012 incident.

Barragan was also charged with possession of a controlled substance in the incident and will be arraigned on September 24th. 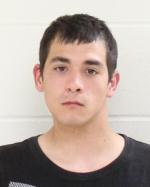