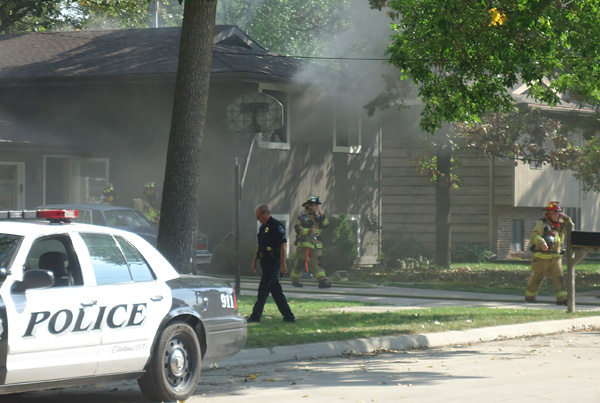 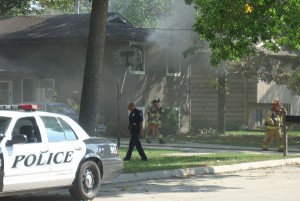 by Jody Spear, Kelley Meyer and other NIT Staff –

MASON CITY – Mason City fire fighters responded to a fire at 1008 15th St. NE Sunday morning around 10:20 AM. Smoke was reported coming out of the second story window.

Two people were out of the house and reported to have smoke inhalation.  One person, an 18 year old male, was taken to Mercy Hospital by ambulance.  It was said that he rescued a younger sibling and went back into the house to rescue the pets.  His condition was not known but wasn’t believed to be serious.

Teresa Hershey, who lives in the home, asked “were are my kids?” while approaching neighbors as authorities were on the scene working on the home. Teresa and her husband, Doug, were quickly informed that the children were out of the house.

“The little guy is over there,” said Sharon Steckman, pointing to a young boy standing across the block on the sidewalk.

The Hersheys were told that their pets were taken out of the home, one of them via a 2nd story window by fire personnel.

Kevin and Julie Brunsvold, neighbors to the above address, said, “They are very much animal lovers. Their pets are their world.  One is in our garage and they asked if they could keep them in there for the time being.”

Teresa wanted to make a statement: “To lighten things up and on the brighter side – let everyone know Mama T’s car is fine.”

The fire was reported under control and put out at 10:50 AM. Chief Platts was at the location assisting. 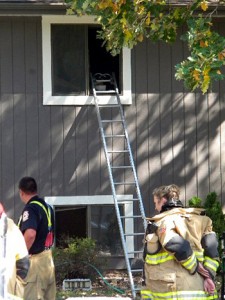 Watch video (should be available by 12:45, it is still uploading):