GOP platform on abortion is tougher than Romney’s stance 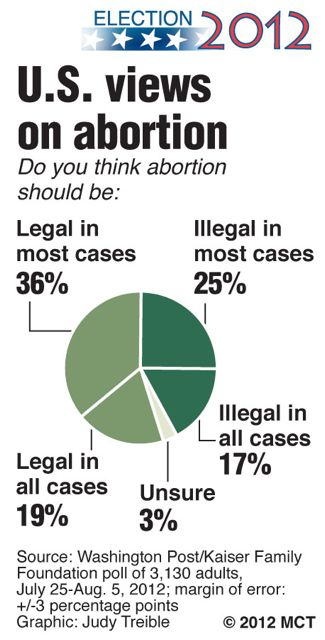 WASHINGTON — Republicans who are drafting the party’s platform approved strong anti-abortion language Tuesday that makes no exceptions to allow abortion in cases of rape or incest victims, a statement of principle that Republican presidential candidate Mitt Romney has said is too limiting for his own beliefs.

Repeating the party’s official 2008 position, the 2012 platform calls for “a human life amendment” to the Constitution and says “the unborn child has a fundamental individual right to life which cannot be infringed.” It makes no specific references to exclusions, and it’s expected to be adopted with little dissent on Monday’s opening day of the Republican National Convention in Tampa, Fla.

Romney, like nominees in the past, said he’d set his own agenda and wouldn’t follow the party platform word for word.

“Mitt Romney’s position is clear: He is pro-life. He opposes abortion with exceptions for rape, incest or to save the life of the mother,” Romney spokeswoman Amanda Henneberg said.

While a platform states a political party’s goals and principles on major issues, it often reflects the concerns of the many interests in the party more than the agenda of its presidential nominee.

Despite that, Democrats seized on the platform language to label the Republicans as anti-women. They also worked to link it to the controversy over a Republican Senate candidate in Missouri who opposes abortion rights even in cases of rape, who touched off a political firestorm by suggesting that most women can’t even become pregnant if they’re raped.

Rep. Todd Akin of Missouri, his party’s nominee in the Senate campaign against Sen. Claire McCaskill, D-Mo., said women had a biological capacity to ward off pregnancy in cases of “legitimate rape.” Akin has apologized for misspeaking, but he vowed Tuesday to remain in the race despite enormous pressure to quit from fellow Republicans.

Seeking to capitalize on the Akin brouhaha, Democrats worked to link the party platform to him and to argue that it’s a better gauge of party goals than Romney’s own position is.

“Today, Republican leaders passed the Akin amendment as their party platform, banning abortion for all women even in the case of rape,” said Lis Smith, an Obama campaign spokeswoman. “Women across the country should take note of the Republican Party’s position, and not trust any of the false promises made by Mitt Romney and Paul Ryan on the campaign trail.”

The Romney campaign called that nonsense. “The Obama campaign is attempting to scare voters with false charges in an effort to distract from President Obama’s litany of failures in office,” Henneberg said.

For all the attention the abortion issue has received lately, it rarely plays a role in determining the outcome of a presidential election, and it’s unlikely to have much impact this year, according to Brad Coker, the managing director at Mason-Dixon Polling & Research in Jacksonville, Fla.

“The election’s going to be about jobs and the economy, and to some extent health care and Medicare,” Coker said.