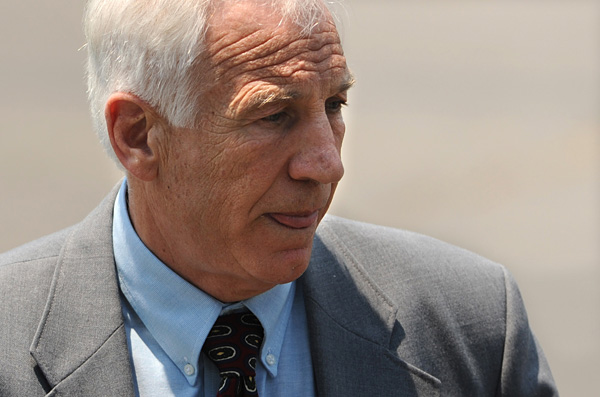 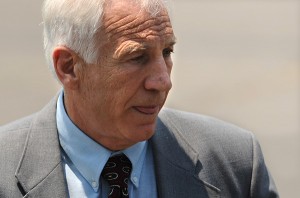 By Jeff Gammage and Jeremy Roebuck, The Philadelphia Inquirer –

Starting Thursday morning, they heard vastly differing closing arguments from the defense and the prosecution, with several accusers in attendance.

Defense attorney Joseph Amendola’s voice caught as he described Jerry Sandusky’s life of good works, brought down by false allegations of money-seeking families, greedy private attorneys and police intent on getting a conviction.

Prosecutor Joseph McGettigan III later countered that the attorneys defending the former Penn State assistant coach resorted to a strategy typically employed in the face of overwhelming evidence: Admit what must, deny what they can, call everyone a liar, and allege a conspiracy.

After McGettigan concluded his remarks, jurors began deliberating the fate of Sandusky, accused of sexually abusing 10 boys during 15 years, at 1:12 p.m. EDT. They’ll be sequestered without access to cell phones or outside contacts, and will be required to continue their discussion through the weekend, if need be, Judge John M. Cleland has decreed.

If convicted, Sandusky could face up to the rest of his life in prison.

He noted that some victims have signed contingency agreements with lawyers, and not local attorneys, but counsel from Philadelphia, Baltimore and elsewhere.

The earliest allegations would have occurred when Sandusky was in his mid-50s. At that age, Amendola said, he suddenly becomes a pedophile? He said that police pressure on the accusers led them to add new, terrible details to their stories, that lesser accusations grew into ruinous criminal charges.

State police investigators told alleged victims in interviews that others had come forward, that Sandusky typically progressed from touching to forced oral sex to rape, and that they should state exactly, specifically what had been done to them — a nudge that they had to come up with additional, incriminating details, Amendola said.

He noted that two state police officers, called separately to the stand, contradicted each other about whether they had discussed their previous testimony with each other during a break in the trial.

“This man’s life’s at stake,” Amendola said, turning toward Sandusky. “I submit to you they were going to get him come hell or high water, even if they had to coach witnesses.”

“He doesn’t stop it. We got the Penn State police department literally 30 seconds away. 911? They get the young boy, they get Jerry Sandusky, case over. He doesn’t do that.”

McQueary’s allegations, relayed to his father, a family friend, football coach Joe Paterno, the athletic director, a vice president, were so vague that none of those five respected figures felt motivated to call the authorities. He assumed he saw something that he didn’t actually see, Amendola argued to the jury.

McGettigan spoke second in climatic closing arguments, asking: Was everyone in on the conspiracy? The investigators who conducted an initial inquiry in 1998? McQueary, who testified he witnessed an incident in the football locker-room showers in 2001? The grand jurors who indicted Sandusky last year? Himself, standing here in the courtroom today?

“It collapses of its own weight,” he said. “If you conclude there was a conspiracy, bring in the handcuffs and take me away.”

At one point, McGettigan flashed the boyhood photos of eight alleged victims onto a viewing screen, then followed that with a photo of an unsmiling Sandusky.

“That’s the person who did it,” the prosecutor said.

McGettigan said it’s easy for defense counsel to paint the victims’ graphic testimony in court — several initially denied or minimized their alleged abuse to investigators — as part of a conspiracy. In fact, it was a human response, to try to block out the trauma they had endured because of their fear and shame.

In no instance, he said, did the defense show that the alleged abuse had not occurred. Amendola didn’t ask about specific instances of abuse, he said, because only damning details would come out in court.

The prosecutor dismissed the laudatory accounts of character witnesses who described Sandusky as a caring family man who did all he could for children, giving them money, taking them to football games, giving of his time.

His work with children at his Second Mile charity gave him access to a pool of children, along with the ability to learn their phone numbers, addresses and family situations.

“Think about what happened to him that night. … He couldn’t imagine this,” the prosecutor said. “Joe Paterno was the go-to guy, and he went to the go-to guy.”

Before closing arguments began Thursday morning, Judge John M. Cleland dismissed three charges, reducing the number of counts to 48. Two weren’t supported by testimony — Victim No. 4 testified the assault was attempted, not completed, as charged — and another was a duplicate charge, Cleland ruled.

He denied a defense motion to dismiss another five charges. At issue was whether the timing of an alleged assault was contradicted by Penn State’s home football schedule.