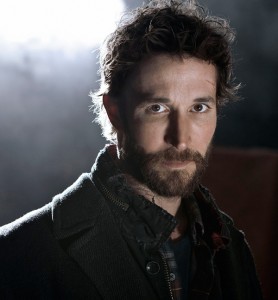 Early in the return episode of TNT’s alien-invasion drama, his character is hit with friendly fire, and he undergoes emergency surgery.

(PHOTO: Noah Wyle stars as the leader of a group fighting aliens in the second season of “Falling Skies” on TNT.)

Not that Tom Mason, a history professor-turned-resistance leader, is in any danger of dying on that gurney. Wyle is the show’s leading man, and he’s scheduled to appear in all of this season’s 10 episodes.

“Shooting that scene was actually quite comical,” says Wyle, who played a TV doc for more than a decade on “ER.” “I’m lying there, supposedly unconscious, but I’m also instructing the actors on how to hold the instruments. So I was playing both patient and medical adviser at the same time.”

All those years of faux-surgical training made him a stickler for detail to this day. And he’s just as committed now to making “Falling Skies,” which airs at 9 p.m. EDT Sunday, ring true.

“Science-fiction fans are pretty savvy viewers, and they don’t want to feel cheated,” Wyle says. “Success or failure on most genre shows is predicated on paying attention to the mythology, on dotting all your i’s and crossing all your t’s, on making sure you’ve thought all this stuff out thoroughly.

“I remember the first time we went to Comic-Con in 2010. We had a panel there, although nothing had been shown yet, and the body language of the audience was pretty cynical. They were like: ‘Why should I love you? How are you not going to disappoint me the way countless other shows have broken my heart?’ We had to combat that skepticism in the first season. But I think we’ve earned their trust.”

Now comes the stuff that makes series television so compelling: the middle of the story.

Similarly themed movies like “Independence Day” and “War of the Worlds” were good, that’s true. But they barely scratched the surface storytelling-wise, because they had to compress a beginning, a middle and an ending into just a couple of hours of screen time.

“Falling Skies,” which focuses on the aftermath of the apocalyptic assault, has luxury to explore deeper themes of family unity, coping with tragedy, starting over. These are topics that shouldn’t be rushed.

“One of the things I’ve been happy about is this doesn’t seem to be particularly 100 percent genre show,” Wyle says. “There are people who get a kick out of the aliens and the spaceships and the mythology. But a lot of the comments I get from viewers often have more to do with the human aspect of the show, people responding to the way I deal with my sons and the relationships between the characters.”

Wyle is a longtime sci-fi fan.

“I was weaned on first-run episodes of ‘Star Trek,’ and I grew up during the years of the original ‘Star Wars’ trilogy,” he says. “That’s like scripture to me. ‘Close Encounters of the Third Kind’ and ‘E.T.’ were monumental films for me. More recently, I thought ‘District 9’ was absolutely brilliant.”

Wyle relished the ending of Season 1, when Tom went away willingly with the aliens in one of their ships. It reminded him of when he was a kid watching ‘Close Encounters’ and wishing he could hitch a ride in an alien spaceship the way Richard Dreyfuss did.

“The circumstances were very different in our show. I was riding off with them for a different reason, but it wasn’t lost on me that this was a childhood dream realized,” Wyle says. “And even more gratifying, I got to see the same sense of wonder play out across my 9-year-old son’s face.”

It’s fitting that his son enjoyed it. He was responsible for Dad doing the show in the first place.

“I remember I had four pilot scripts sitting on my desk, all of them TNT projects,” Wyle says, “and I asked my son, ‘Do you want to see your dad be a policeman or a lawyer or an insurance adjuster or an alien fighter?’ And he didn’t hesitate. He chose ‘Falling Skies.’

“So far, neither one of us has been disappointed.”