Victim No. 4 testifies Sandusky’s abuse was accompanied with gifts 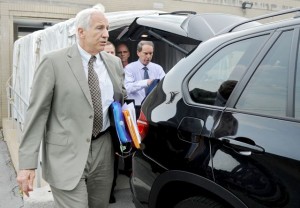 BELLEFONTE, Pa. — The first time alleged victim No. 4 was near Jerry Sandusky, he said Sandusky brushed over his crotch while throwing him into the lake at Sayers Dam at a family picnic.

(PHOTO: Jerry Sandusky talks with his attorney Joe Amendola as he walks out of the Centre County Courthouse after the first day of his trial on Monday, June 11, 2012, in Bellefonte, Pennsylvania.)

But he testified Monday, as the former coach’s trial began at the Centre County Courthouse, that those touches turned into more outright sexual advances.

The witness told the jury about two sides of Sandusky: One that regaled him with gifts, took him to Penn State football games and turned him into a college football fanatic, and the other, a man with a darker side who initiated soap fights in showers, soon began caressing and wrestling him, eventually forcing him into oral sex “at least 40 times,” even threatening to send him home from a Penn State bowl game if he didn’t comply with the demand.

“After a while, the soap battles would lead more to him wrestling around and maneuvering me onto the ground and once that would happen,” he testified, Sandusky “would basically maneuver himself to where I would be between his legs and his penis would be in my face.”

The man said he was hesitant at first to break away, not wanting to lose the gifts and attention — things he otherwise wouldn’t have had. But when he tried to distance himself from Sandusky, he testified, Sandusky went as far as drawing up a contract that promised money in exchange for spending time together.

“I kind of looked at Jerry as a father figure,” testified the man, the first witness in the trial and whose testimony lasted about 3 ½ hours. “He was nice to me other than those instances.

The Centre Daily Times does not publish the names of alleged victims of sexual crimes.

The testimony detailed numerous allegations of abuse, which the witness said lasted for several years before he did break off contact in 2002. He said he met Sandusky through The Second Mile at a summer camp on Penn State’s campus in the late 1990s and was invited to spend time with Sandusky shortly after.

The man described his relationship with Sandusky as “night and day” — the football games he got to go to, where he would hang out with Penn State players, were the great times he said he didn’t want to give up by reporting the abuse. But the side no one saw — and no one spoke of — was Sandusky “trying to treat me like his girlfriend,” such as blowing on his thighs or putting his hand on the boy’s knee during car rides.

He said after one incident, when Sandusky tried to slide a finger between his buttocks, Sandusky bought him a snowboard.

He said he’d be awakened while sleeping at motels, saying Sandusky would be touching him but then would go back to working out on the floor.

But he said he never told Sandusky to stop.

“It was never talked about, ever,” the man said. “It was basically like whatever happened there never really happened.”

The man didn’t back down from his testimony of yearslong abuse when cross-examined by defense attorney Joe Amendola. And the man, wearing a white button-down shirt and dark tie, denied the defense’s suggestion he only got a lawyer to seek a civil suit for financial gain or that he knew some of the other alleged victims, some of whom are from the school district where he grew up.

The man was calm and didn’t appear intimidated by the nature of the questions, even the very graphic ones in which he was asked to describe the sexual encounters in detail.

He seemed to avoid making eye contact with Sandusky — whom he referred to as “Jerry” — and instead focused on the attorney asking him questions.

But there was one moment of weakness from his otherwise stalwart testimony.

He said he came to hear about the grand jury investigation into Sandusky after a phone call from his father, whom he didn’t live with growing up. After seeing a story published in the media, his father called him and said his “buddy” Sandusky was being investigated for molesting children.

The man said he told his father it wasn’t “a surprise” to him. He thought he was only one boy who was allegedly abused.

He got a little emotional when acknowledging that he didn’t report the alleged abuse sooner.

“I feel responsible for what happened to the other victims,” he testified.

The prosecution showed as evidence a variety of letters that Sandusky wrote to the man when the man was a teenager.

The man described some of them as “creepy love letters,” in which Sandusky said he loved him.

In one letter, Sandusky wrote he can “pretend that I can sing. I pretend about many things. However I can’t pretend about my feelings and want you to always remember that I care.”

In another, Sandusky wrote that “Jer became attached to (him) and always will be.”

One had a more encouraging tone with some scolding undertones, saying the boy only came around when it was convenient for him.

“I don’t know what you think about me sometimes,” Sandusky wrote.

The man said Sandusky wrote that when he was trying to break off contact.

Amendola didn’t address the letters the man called “creepy” but pointed out the intent of the letter with the message of encouragement.

The prosecution showed the jury several contracts that Sandusky drew up when the man was a teen. Sandusky promised money for college in exchange for him participating in sports and even working out three times a week.

One was presented as a way to participate in a golf mentoring program, which Sandusky called a program that was of The Second Mile.

Amendola suggested the contract, which included monetary incentives for meeting goals, was for his benefit.

The man thought that absurd.

“Clearly that is a contract for him to get me to be around him more often,” the man said. “He was encouraging me to come over.”

Second Mile employee Marc McCann, brought on to testify afterward, said the programs that Sandusky wrote up were not approved by Second Mile officials. McCann said he had never seen them until recently.

‘Paying attention to me’

A number of factors kept the man from coming forward before police found him in 2011, he testified.

Before the call from his dad in which he opened up about the alleged abuse, the only other time he had referenced it was when he told his mother he thought Sandusky was gay.

That came during an argument, he said, in which his mother was telling him he should spend time with Sandusky because Sandusky had been so generous.

His grandmother, with whom he was living growing up, thought it was his obligation to spend time with Sandusky, too, and there was “no way” he could talk to her about what he was going through, he said.

Further, he said he was conflicted about coming forward because that meant he would have to give up the gifts and the attention Sandusky gave him.

He said he thought he was cool in school, because he would hang around Penn State football players.

“I don’t want to lose somebody actually paying attention to me,” he said.

A clean, sudden break would set off red flags, he said, and he wasn’t prepared to deal with explaining it.

For as cool as he thought he was in school, he said he was teased by those who thought there was something odd about his relationship with Sandusky.

He testified it was the police who contacted him first, because they must have read through Sandusky’s autobiography, “Touched,” in which the boy is mentioned throughout, he said.

But he wanted nothing to do with the police — “I don’t even want to be involved now to be honest,” he said.

In that first meeting with police, “I was basically real hesitant, didn’t tell them much of anything,” he said.

During a second meeting, at the state police barracks outside Milesburg, he had his attorney, Ben Andreozzi, who he said his dad helped him find.

The man didn’t get into details until later when he appeared before the grand jury.

During cross-examination, Amendola questioned the man’s retaining of an attorney, but the witness said he hasn’t paid Andreozzi anything and hasn’t talked about filing a civil lawsuit.

The man said he finally made his break from Sandusky in 2002, but his girlfriend was suspicious about the relationship with the older coach.

So the man got back in touch with Sandusky in 2010 and offered to come over to see if he could get his girlfriend to believe him, even “try to fool her.”

But it backfired on him.

They ate Kentucky Fried Chicken for dinner on the back porch, Sandusky “did the awkward try-to-rub-my-shoulder kind of thing” and they were there for an hour or an hour and a half.

A friend of Dottie Sandusky’s was there and told the defense it was as though the man, his girlfriend and their toddler son were trying to be a part of the Sanduskys’ lives again.

That’s what Amendola told the jury in his opening statements and suggested toward the end of alleged Victim No. 4’s testimony.