Kevin F. Kolbye, Acting Special Agent in Charge, Dallas, Federal Bureau of Investigation (FBI), and Randall C. Till, Inspector in Charge, Fort Worth Division, U.S. Postal Inspection Service (USPIS), announce a reward of up to $150,000 for information leading to the identification, arrest, prosecution, and conviction of the person(s) responsible for the recent mailings of letters containing white powder in the Dallas/Fort Worth area. The reward flyer is posted below.

During the week of May 7, 2012, over 20 letters containing white powder were received by early childhood development centers, elementary schools, and an aerospace-related business. These letters were received in Texas and several other states. The FBI, USPIS, local law enforcement, and local fire department hazardous materials teams responded to each location and field screened the letters for the presence of toxins or poisons. To date, none of the mailings have contained hazardous materials.

Each letter was sent through the U.S. mail and featured a postmark from North Texas. It is highly likely these letters were sent by the same person responsible for mailing over 380 letters, beginning in late 2008, each of which contained a non-hazardous substance. This person has sent letters to elementary, middle, and high schools; day care centers; churches; government offices; U.S. Embassies abroad; restaurants; and other private businesses. A sample letter is posted below.

The author has and continues to reference subjects such as al Qaeda and the Nazi SS, which is believed to have been included for shock value rather than to express any sincere sympathy or affiliation. In a recent letter, he used the terms “Scooby Doo” and “triple dealer spy” and made reference to CIA counterintelligence and FBI internal affairs.

The sender has taken steps to conceal his activities and prevent law enforcement from finding physical evidence of his crimes, including his fingerprints. A flyer announcing the reward along with possible details about the subject has been posted on the Dallas FBI website (www.fbi.gov/dallas) and on the USPIS website (postalinspectors.uspis.gov).

Although mail is screened for toxic substances prior to delivery, the public is reminded to take the following precautions should they open a piece of mail with a powdery substance in it.
Leave the immediate area where the powder was spilled but keep yourself separated from individuals who have not been exposed to the powder. Do not attempt to clean up the powder and do not move the letter. Isolate the area where the spill has occurred.
Wash hands immediately.
Call 911 and advise them of the receipt of the mailing.
Remember, all instances of white powder in this matter have tested negative for a toxic substance. The white powder, however, should still be handled with caution until verification of its lack of toxicity is received. 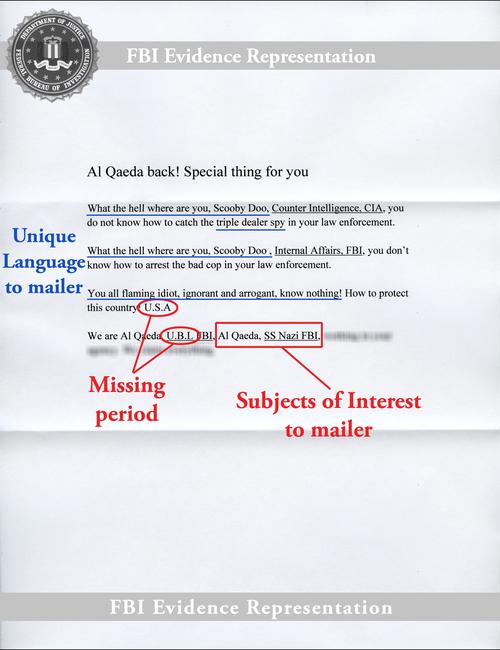