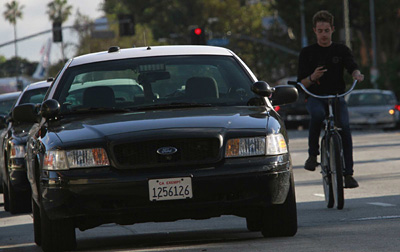 LOS ANGELES — The University of Southern California and the Los Angeles Police Department announced sweeping new security measures Thursday, including the addition of 30 police officers to the area surrounding the campus.

The move comes three weeks after the university was stunned by the slayings of two graduate students from China, a case that remains unsolved. The measures go beyond more police on the street to include the sharing of crime data with USC public safety officials, the installation of more security cameras and the addition of a city prosecutor who will focus on cases in and around the campus.

“This will provide a significant increase in police presence around USC,” said LAPD spokesman Andrew Smith, adding that the extra 30 officers will increase the Southwest Division’s total personnel by about 7.5 percent.

An LAPD detective, as well as four officers, will be assigned specifically to work on and around campus with USC safety officials.

The additional officers, which were shifted from other LAPD divisions, will increase patrols and conduct more frequent parole checks on local gang members.

More security cameras will also be installed, and USC will continue to trim overgrown trees that have been blocking street lighting, an initiative that the university has been working with the city on for several years, said USC public safety Capt. David Carlisle.

“We got permission from the city to trim city-owned trees at our expense,” Carlisle said. “The city has also allowed us to put security cameras on city light posts and change in brighter, more energy-efficient light bulbs.”

Officials said USC will also cover most of the personnel costs for the new officers, though no details were provided by LAPD Chief Charlie Beck, who was joined at a news conference Thursday by Mayor Antonio Villaraigosa and USC President C.L. Max Nikias.

Although crime around the campus has dropped in recent years, the killing of the Chinese students is not the only recent incident that has unnerved the community.

Last week, a campus police officer shot and wounded a man suspected of robbing four students at gunpoint as they walked along the university’s fraternity row about 12:30 a.m. The students were not injured.

A week earlier, Ming Qu and Ying Wu, both 23 and graduate students from China studying electrical engineering, were fatally shot less than a mile from campus.

The two had been chatting in a 2003 BMW about 1 a.m. when a gunman approached and shot two or three times into the driver’s side. Property belonging to the students was later found to be missing, leading investigators to suspect that robbery may have been the motive for the crime.

No one has been arrested in connection with the killings. The city and school have offered rewards totaling $200,000 for information leading to an arrest in the case.

After the deaths, more than 1,000 friends, faculty and officials came together for a formal memorial with the victims’ families. Students organized a candlelight vigil, and many have held gatherings in local chapels.

A quiet funeral was held last Friday before the parents returned to China. Various student organizations have raised more than $18,000 for the two families, Peter Wang, president of USC’s Chinese Students and Scholars Association, said.

Wang, a junior at USC, said he hopes the university will follow through with the security enhancements. The association and other student groups have been leading open forums on safety concerns and are meeting with Nikias next week to discuss future improvements such as increasing on-campus housing and safety orientations for incoming students.

“I’ve had friends back in China (considering schools in America) email me about the current situation, asking how security is,” Wang said in Chinese. “For the last two weeks, I’ve been responding, ‘I’ll see what we can do.’ Now I can tell them this new information and hopefully we can all feel safer.”