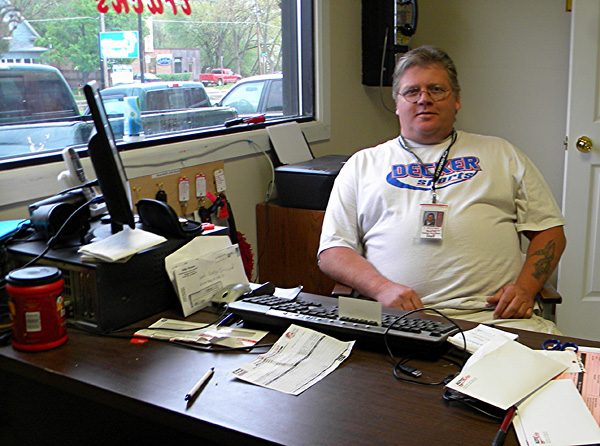 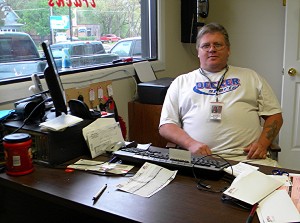 Germundson (pictured) first looked at the location of the old Smitty’s Auto Sales on North Federal for his new business, but was turned down by the DOT. He then took some time to look for a new location. One day he pulled into Kwik Mart’s parking lot, sat there for about an hour and watched the traffic, “There is a ton of traffic that passes by here,” he said.

He proceeded to go ask the owner of the property, Gullsun “Sonny” Abbass, if he’d like to lease it out to him.

February 19th, Germundson and a crew of friends and family, started transforming the building that was once a convenient store into a car dealership. He starting clearing everything out, putting up walls, putting in new wiring, making an office and a mechanics garage.

His security system will be completed Friday. He is also putting in motion detectors. “This is not a bad neighborhood, it’s just a poorer one,” he said.

Just waiting for the new sign, Mason City Auto Sales, that would hang above the door, he was ready to open. The sign arrived and put up Tuesday and he opened the door today.

Starting with 15-20 used, affordable cars and trucks, “I’m am selling vehicles, right now, that are $3000 and under.” He would like to expand some day, “We’ll see how this goes,” said Germundson.

All used cars are “As Is”, but if something reasonably goes wrong, “I’ll work with them, within limitations.”

Germundson is planning a Grand Opening, May 19th from 1pm to 3pm. There will be food and drinks so people can see his new business and his vehicles.