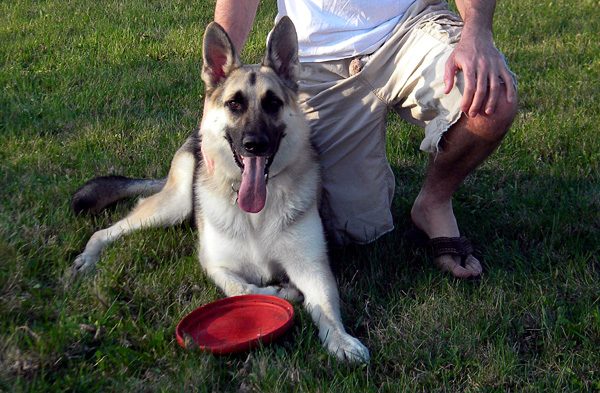 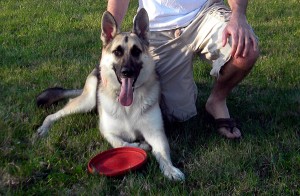 MASON CITY – Brian and Sarah Novacek had no idea of the special prize they would find when they headed to Belmond two and half years ago in the middle of a storm.

They brought home with them a six week old German Shepherd pup that they named Storm.

“Sarah and I both agreed it was the perfect name, considering the weather we drove in to bring him home,” said Brian.

Brian and his father own Legacy Auto Sales, located at 824 North Federal Avenue.  Storm goes to work with Brian everyday.  “He’s been coming to work with me since he was a pup,” Brian said.

Regular customers and friends come in just to be greeted by Storm. They bring in treats for him and some take him for walks. 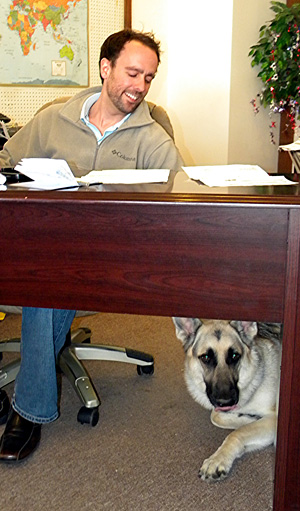 “He’s great for sales,” says Brian’s mom Mary Novacek, who is a Sales Associate. “He poses by the marquee we have out front, but he doesn’t like the balloons,” she giggles.  Mary pops up some advertising pictures with Storm sitting by the store’s sign encouraging people to come in and check out their cars. “‘Reliable Cars with Great Prices!!!’ is what he’s trying to say.”

About two months ago, Sarah and Brian had a baby boy that they named Grant. Things are a little different around the office when the baby is there.  Storm watches everyone getting too close and warns them to be careful.  He’s very protective. “When my wife was pregnant, Storm watched over her. He wouldn’t play,” said Brian.

When Storm is not at work or protecting his family, he enjoys his time with Brian at a park close to their home playing Frisbee. “I bring him here once or twice a day,” said Brian. “We’re together 24/7. I’m with him more than I with Grant. At night he sleeps right next to us.”

Storm is a valuable asset to the Legacy Auto Sales business and an all around great friend, trusty companion and protective family member.