Family at John Edwards’ side as jury selection begins 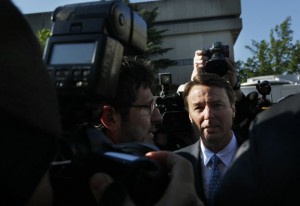 GREENSBORO, N.C. — The scandal that engulfed John Edwards shattered his image as a devoted family man and led to his indictment. But as the former Democratic presidential candidate and senator walked into a federal courthouse Thursday, he was a man surrounded by family.

(PHOTO: Former U.S. Senator John Edwards arrives at the Federal Courthouse in Greensboro, North Carolina, on April 12, 2012, for the first day of jury selection in his trial on charges of campaign finance violations during his run for president.)

Edwards, fighting allegations that he violated federal campaign finance laws during his failed 2008 bid for president, was flanked by his parents and his grown daughter Cate as jury selection began in his case.

Prosecutors contend Edwards secretly obtained hundreds of thousands of dollars from two wealthy supporters — one who is no longer alive and another who is more than 100 years old — to provide living expenses for a paramour who was pregnant with his child.

That woman, Rielle Hunter, was a campaign videographer who gave birth to their daughter, Frances Quinn, at a time when Edwards’ wife, Elizabeth, was battling the cancer that ended her life in late 2010.

Fred Baron, a wealthy Texas lawyer, and Rachel “Bunny” Mellon, a benefactor, provided more than $900,000 in living expenses for Hunter, prosecutors say. They argue the money should have been reported as campaign contributions because it was meant to help Edwards preserve and protect his family-man image.

As Edwards’ family watched from the back of a third-floor courtroom in the federal courthouse in Greensboro, two groups of 100 men and women were given a brief review of the jury selection process by Judge Catherine Eagles.

They were young and old. And they came from the far-reaching federal court district that extends from Statesville in the west to Durham in the east and includes Orange County, where Edwards lives.

Eagles, in a speech that was conversational and sometimes light-hearted, told the potential jurors what 16 of them — 12 jurors and four alternate jurors — might do for the next month and a half.

The case, on its surface, seems to be one that is as much made for the tabloids as it is for legal scholars studying the reach of federal regulations governing elections.

But Eagles told the men and women what would be important.

Eagles, a federal judge who many years ago worked in the same firm as Alan Duncan, a Greensboro lawyer who Edwards recently added to his team, told potential jurors that those selected would be part of an “interesting case.”

But she cautioned them that serving on a jury in federal court about a matter of campaign finance law was not going to be anything like they might have seen on such TV dramas as “Law & Order,” “CSI” or even “Judge Judy.”

“I know this will shock you,” Eagles said, “but on shows like that they sometimes make stuff up. Put that out of your mind. I will tell you what the law is.”

There are many ways TV shows are unrealistic, Eagles continued. “And one of them is that on TV shows, justice only takes an hour.”

In movies, she said, it might be two hours.

But prosecutors and defense attorneys project that Edwards’ trial could last through May.

The opening of jury selection drew a large group of media to downtown Greensboro on Thursday, with TV trucks parked along the side of the road and camera crews near the courthouse steps.

When the 58-year-old Edwards arrived about 15 minutes before court was scheduled to begin, a newswoman from “The Today Show” asked him how he was feeling. He responded that he would not answer any questions.

The potential jurors were sent to a private room to fill out questionnaires after Eagles told them what to expect.

She urged them not to tell anyone they might be selected to deliberate the Edwards trial. That way, she said, they wouldn’t be in an awkward position of listening to opinions about the case outside the courtroom, something that is prohibited.

Questioning of jurors in open court is expected to begin Tuesday. Opening statements are set tentatively for April 23.

Whether Edwards gets the verdict he wants may well depend on whether he gets the jury he wants. Lawyers say a case can be won or lost in jury selection.