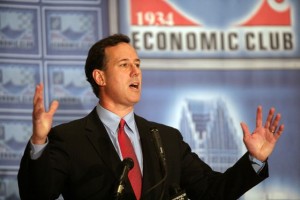 By William Douglas, The Philadelphia Inquirer –

WASHINGTON — Former Sen. Rick Santorum, who shocked the political world by emerging from the back of the Republican presidential pack to pose a formidable challenge to former Massachusetts Gov. Mitt Romney, suspended his campaign Tuesday.

“We made a decision to get into this race at our kitchen table against all the odds, and we made a decision over the weekend that, while this presidential race is over for me and we will suspend our campaign today, we are not done fighting,” Santorum said.

His exit comes two weeks before Pennsylvania’s primary; a race that he acknowledged had to win. But Santorum, who lost his Senate seat in a crushing 18-point defeat to Democrat Bob Casey in 2006, saw his comfortable lead in some Pennsylvania polls rapidly erode into a close contest — even before Romney dipped into his campaign war chest to unleash a barrage of television ads against his rival.

The 53-year-old senator was a virtual Washington afterthought until his surprising success this winter. A year ago, he was such an underdog he would walk around the Iowa legislative building, seeking people to talk to. He would travel the state with his driver, stopping to talk to handfuls of people at a time.

But one by one, his chief rivals for the conservative mantle faded. Minnesota Rep. Michele Bachmann won August’s straw poll, usually a launch pad for a strong candidacy. But as Texas Gov. Rick Perry began his presidential bid the same day, Bachmann found herself buried under the publicity the newest party curiosity was attracting.

Perry faded, too, after a series of brutal debate performances. Then would come businessman Herman Cain, felled by allegations including sexual harassment, and former House of Representatives Speaker Newt Gingrich, who led briefly in most polls.

Santorum’s message of unapologetic conservatism — and his long record of activism against abortion and other social issues dear to conservatives — made him a serious contender. He won the first-in-the-nation Iowa caucus (though it originally was reported as a loss), found himself in a battle with Gingrich for conservatives, and as Gingrich faded, he emerged as the conservative choice.

But a pattern emerged: In states like Mississippi, Alabama and Louisiana, where evangelical Christians comprise a large chunk of the GOP primary vote, he won. But in states where they were less influential — notably Ohio, Michigan, Florida and Wisconsin — Santorum lost.

He never could spread his appeal to the more mainstream voters that Romney was able to attract. Nor was he able to effectively counter Romney’s ad blitz — Romney and his supporters outspent Santorum by massive amounts in many states.

The Romney ads charged Santorum was in fact a big spender during his dozen years in the Senate. He supported earmarks, the local projects lawmakers inserted into spending bills. And he backed the 2003 Medicare drug plan for seniors that conservatives complained added billions to the deficit.

In the end, Santorum simply was gaining no ground. The pattern kept repeating itself in state after state: Losses in more diverse states, victories in more conservative states.

The next round of primaries had little opportunity for a Santorum breakthrough: New York, where polls show Romney with a double-digit lead. Connecticut and Rhode Island, which border Massachusetts and have similar Republican electorates. Delaware, with a history of electing centrist Republicans to office.

Romney issued a statement: “Senator Santorum is an able and worthy competitor, and I congratulate him on the campaign he ran. He has proven himself to be an important voice in our party and in the nation. We both recognize that what is most important is putting the failures of the last three years behind us and setting America back on the path to prosperity.”