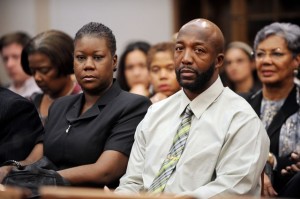 SANFORD, Fla. — Despite public claims that there wasn’t enough probable cause to make a criminal case in the Trayvon Martin killing, early in the investigation the Sanford Police Department requested an arrest warrant from the Seminole County State Attorney’s office, the special prosecutor in the case told McClatchy Newspapers on Tuesday.

(PHOTO: Tracy Martin and Sybrina Fulton, center, parents of Trayvon Martin who was shot to death a month ago in Sanford, Florida, attend a U.S. House of Representatives Black Caucus discussion of racial profiling and the Florida law used in their son’s case on Capitol Hill, Tuesday, March 27, 2012 in Washington, D.C.)

A Sanford Police incident report shows the case was categorized as “homicide/negligent manslaughter.”

Asked to confirm that the police recommended a manslaughter charge, special prosecutor Angela Corey said: “I don’t know about that, but as far as the process I can tell you that the police went to the state attorney with a capias request, meaning: ‘We’re through with our investigation and here it is for you.’ The state attorney impaneled a grand jury, but before anything else could be done, the governor stepped in and asked us to pick it up in midstream.”

A capias is a request for charges to be filed.

The Seminole County State Attorney’s Office declined to comment on whether its prosecutors ever recommended against filing charges.

“If you go with what was reported in the press the first night, there would have been an arrest right away, but obviously something gave investigators pause,” said a source in the Seminole State Attorney’s office who did not want to speak publicly, because the case is now assigned to a different prosecutor. “We get capias warrants all the time. That doesn’t mean we file charges right away. We investigate to see if it’s appropriate. That’s the responsible thing to do.”

The Seminole County State Attorney’s Office was consulted the night of Trayvon’s killing, but no prosecutor ever visited the scene. As the controversy intensified, Florida Gov. Rick Scott replaced Seminole State Attorney Norm Wolfinger with Corey, the state attorney for Duval, Nassau and Clay counties, based in Jacksonville.

“The case now has a new state attorney, and they didn’t file charges the first day they got it, either,” the Seminole prosecutor who asked to remain anonymous said.

The development is in stark contrast to the statements repeatedly made by Bill Lee, the Sanford police chief who has since stepped aside and was lambasted for his handling of the case. Lee publicly insisted that there was no probable cause to arrest Zimmerman, leading many critics to say he came across more like a defense attorney for the security buff.

“Zimmerman provided a statement claiming he acted in self defense which at the time was supported by physical evidence and testimony,” Lee wrote in a memo posted on the city’s website. “By Florida Statute, law enforcement was PROHIBITED from making an arrest based of the facts and circumstances they had at the time.”

He cited the statute number for Florida’s “Stand Your Ground” law, which provides immunity to people who kill someone in self defense.

Lee’s was criticized for his explanations, because many people thought he was bending over backward to protect the shooter based on the results of a shoddy investigation.

A spokeswoman for the city said the police department would make no further comments on the ongoing investigation.

The FBI and Florida Department of Law Enforcement took over the case. An FDLE investigator and the new prosecutor were spotted in Zimmerman’s neighborhood Tuesday interviewing witnesses.

Many of the facts of what happened at the Retreat at Twin Lakes that night remain murky.

What’s clear is that Trayvon was staying at his father’s girlfriend’s house in a gated community in Sanford while serving out a 10-day suspension for getting caught with an empty baggie of marijuana at Dr. Michael M. Krop Senior High School.

He went for a walk shortly before the start of the NBA All Stars game to buy Skittles and iced tea. Zimmerman, who had a history of reporting “suspicious characters,” spotted Trayvon when he was on his way back from 7-Eleven and called police saying he saw someone who looked high, walked too slowly in the rain and appeared to be looking at people’s houses.

The neighborhood watch volunteer, who was licensed to carry a 9 mm semiautomatic handgun in a holster, was recorded on the police line muttering profanities and a possible racial slur. He tailed Trayvon until the boy took off running.

Trayvon’s attorneys say the dead teen’s cellphone records show he was on the phone with his girlfriend, who told lawyers that Trayvon was alarmed that someone was following him. She heard him ask Zimmerman why he was pursuing him, then heard a scuffle before the line went dead.

Zimmerman told police that Trayvon approached him from behind and attacked him. An unnamed police source told The Orlando Sentinel that Zimmerman said Trayvon decked him with one punch and slammed his head on the concrete.

The two tussled on the ground, and Zimmerman took the gun from his waist and shot Trayvon once in the chest.

Zimmerman, Lee told McClatchy Newspapers two weeks ago, was able to articulate that he was in “reasonable fear” of great bodily harm or death. Witness statements and a doctor’s report corroborated his injuries, Lee said. A police report said he had a bloody nose and a grass-stained shirt.