Super Tuesday: 10 states, coast to coast, and it’s all about delegates 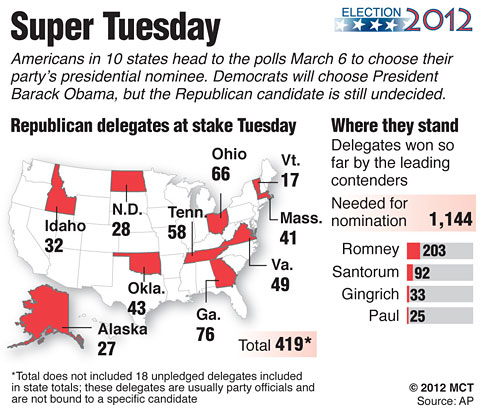 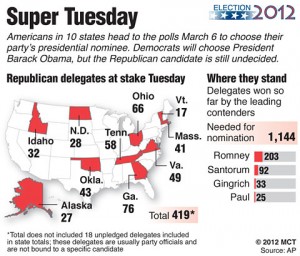 WASHINGTON — The Republican presidential campaign spreads out across 10 states Tuesday — Super Tuesday — a coast-to-coast test that could allow front-runner Mitt Romney to start pulling away from his persistent rivals.

Challengers Rick Santorum, Newt Gingrich and Ron Paul each have a shot at victories in selected corners of the Tuesday map, and each should win some delegates.

But Romney’s well-moneyed political machine will allow him to compete everywhere, and the landscape suggests a broad win for the former governor of Massachusetts.

He will start the day with two states all but locked up — Massachusetts, his home state, and Virginia, where Santorum and Gingrich failed to qualify for the ballot. He will have an organizational advantage fighting Santorum for delegates in Ohio. And he will look to deliver delegates in smaller, less-watched states such as Alaska, Idaho, North Dakota and Vermont, where his chief competition comes from Paul.

Combined, Romney could add to the lead he already enjoys in the all-important tally of delegates needed to win the nomination.

He leads the field with 203 delegates, according to The Associated Press. Santorum, the former senator from Pennsylvania, has 92. Gingrich, the former speaker of the House of Representatives, has 33. Paul, a congressman from Texas, has 25.

On Tuesday, 419 more delegates are at stake, more than the total awarded in all previous contests so far and the most of any single day this year. The 10 states holding caucuses and primaries to award those delegates: Alaska, Georgia, Idaho, Massachusetts, North Dakota, Ohio, Oklahoma, Tennessee, Vermont and Virginia.

With Romney already leading in the delegate count, the critical test for his challengers is to win more delegates than he does, regardless of how many states’ popular votes any candidate wins.

“This is now about delegates,” said Peter Brown, assistant director of the Quinnipiac University Polling Institute. “You don’t get to be president by winning moral victories.”

On Tuesday, Romney’s rivals essentially spot him delegates before the voting even starts. He has an overwhelming lead in Massachusetts, which has 41 delegates available. He also leads by large margins in Virginia, where he faces only Paul for the state’s 49 delegates.

Santorum is banking on wins in Oklahoma, with 43 delegates up for grabs, and Tennessee, with 58. He’s also hoping to score in Ohio, which is drawing the most intense attention, not least because it’s a crucial battleground in November.

“Here in the heartland, our campaign is within striking distance of pulling off another string of victories on Super Tuesday,” Santorum told supporters Monday via email. “Despite being outspent 12-1 by the Romney machine, we are polling ahead in Oklahoma, Tennessee and (are) neck and neck in Ohio.”

Romney has an organizational edge in Ohio, where Santorum failed to file names of pro-Santorum delegates in all districts. He sacrifices any chance at nine delegates and could cede another nine — more than a quarter of the state’s 66.

Gingrich leads in his former home state of Georgia. Romney’s a distant second, hoping to win some of the state’s 76 delegates in congressional districts in and around Atlanta.

Romney also could win a plurality or a majority of the 145 delegates available in smaller states largely overlooked by rival campaigns and the media.