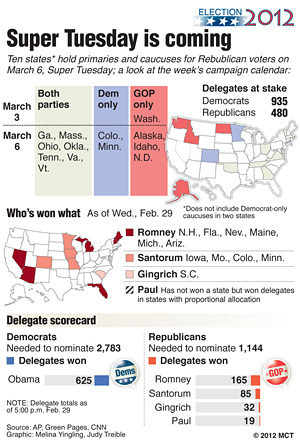 TOLEDO, Ohio — The battle for the Republican presidential nomination spread out across the country Wednesday, as a relieved Mitt Romney talked economics and a feisty Rick Santorum portrayed himself as the field’s bona fide conservative.

As the GOP race expanded to 11 states — Washington, which holds a caucus on Saturday, followed by 10 voting on Super Tuesday March 6 — Republican candidates began crisscrossing the country, tearing into each other as well as President Barack Obama.

Romney, the winner of Tuesday’s Michigan and Arizona primaries, spent his day in pivotal Ohio, which votes Tuesday. At rallies in Toledo and Bexley, he branded Santorum an “economic lightweight” and insisted that he and Obama have sharp differences.

Often criticized for being stiff and scripted, Romney got unusually personal. Responding to questions from a Bexley audience, he talked about being a congregation leader in the Mormon church, reminisced about his father and talked about the joy of having grandchildren.

Santorum, the insurgent former U.S. senator from Pennsylvania who has roused social conservatives, campaigned in Powell, Tenn., with his trademark candor.

He called Obama a know-it-all and Romney a faux conservative. He claimed Michigan was a moral victory, because he and Romney appeared to come away with the same number of convention delegates from Romney’s boyhood home state.

“This is a huge win for us,” Santorum said. “Let’s play it the way it is, don’t give Romney all the spin. We went into his backyard. He spent a fortune, money he had no intention of spending, and we came out of there.”

With 99 percent of Michigan precincts reporting, Romney had 41.1 percent of the vote to Santorum’s 37.9 percent. Trailing were Texas Rep. Ron Paul, with 11.6 percent, and former House Speaker Newt Gingrich with 6.5 percent.

Romney won Arizona handily, with 47 percent to Santorum’s 27 percent. Gingrich got 16 percent and Paul 8 percent. Romney won all 29 Arizona delegates. Thirty were at stake in Michigan; of those decided so far, Santorum and Romney each have 13.

A total of 1,144 delegates are needed to nominate, and 419 are at stake on Super Tuesday. An Associated Press count of delegates to date gave Romney 165, Santorum 85, Gingrich 32 and Paul 19.

Gingrich campaigned Wednesday in Georgia, his former home state, which he said was a “key building block” to reviving his lagging campaign. Paul was in Washington, D.C., for a hearing with Federal Reserve Chairman Ben Bernanke. Paul wants to end the Fed.

Key battlegrounds in the next week are likely to be Ohio — traditionally an important swing state — and the conservative states of Georgia, Tennessee, and Oklahoma.

Santorum said Wednesday he needs to do well in Ohio, where he will aim his pitch to the same kind of fed-up blue-collar conservatives who rallied around him in Michigan. He also plans efforts in Tennessee and Oklahoma, where his social-conservative message is likely to resonate, as well as Washington state.

Romney has no personal events planned in the South this week. Instead, he’s hoping for a win in Washington on Saturday to sustain momentum. He’s also mounting a push in Ohio, which has a history of electing center-right Republicans, and a host of smaller states. He plans to visit North Dakota and Idaho on Thursday.