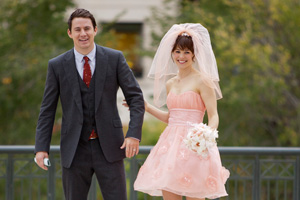 LOS ANGELES — Although they’re just co-stars in the new tear-jerker romance “The Vow,” if you didn’t know any better it’d be easy to think Channing Tatum and Rachel McAdams are an old married couple.

The actors laugh at each others jokes, finish each other’s sentences and compliment each other like a couple who have been together longer than the weeks it takes to make a movie.

That chemistry helps sell the story of a woman who emerges from a coma with no memory of her marriage. It’s up to her husband to find a way to restore those memories.

“This film says that love can survive a lot,” McAdams says.

“The Vow” suggests that there is one great love and that despite tremendous obstacles, it can never die.

“Love is such an intense and wonderful thing it can be applied in many wonderful forms. I do believe you can fall in love with more than one person but that there’s that one person who comes along you want to make a different kind of commitment to them. I think at a certain point there is someone who comes along and you want to do that with — maybe, hopefully, it’s forever,” McAdams says.

As for the movie’s message about marriage, McAdams passes the question off to Tatum. While she’s not married, Tatum has been married to Jenna Dewan since 2009.

Tatum finds it sad the divorce rate is so high in the country and suggests it might be because not enough time is taken to get to know the other person. He spent almost six years with Dewan before they were wed.

“I don’t think people go at it in the right way anymore. We are in such a culture of ‘right now’ and everything is instant,” Tatum says.

Both Tatum and McAdams came into the project with romance films on their resumes. McAdams starred in “The Notebook” and “The Time Traveler’s Wife,” while Tatum was in “Dear John.”

“The Vow” features many of the elements that appear in romance films. One thing Tatum hates about filming a romance is scenes in which a couple appears to be sharing a laugh while mood music plays over the scene. To get the footage, a director will stand off stage shouting at the couple to throw their heads back and laugh.

She throws her head back and laughs.