Detroit auto show signals a turnaround for the industry 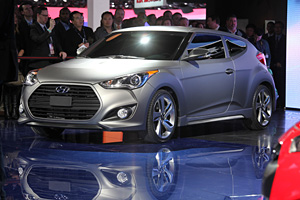 DETROIT — Signs that the auto industry recovery is likely to continue this year are everywhere at the North American International Auto Show — massive two-story video screens, dozens of futuristic concept and previously unseen vehicles and thousands of car parts suppliers and vendors.

The industry’s biggest annual confab opened Monday and looks to be glitzier and larger than in many years, driven by rising auto sales and financially healthier manufacturers.

Nissan Motor Co., for example, is back after a three-year absence. The company plans to show off the direction it is taking with the next generation of its Pathfinder sport-utility vehicle.

“It has to do with the economy, there is no doubt,” said Rod Alberts, executive director of the industry gathering, also known as the Detroit Auto Show.

The hometown auto companies are on a roll. The three big Detroit carmakers all logged double-digit sales growth last year, helping to fuel a 10.3 percent increase in the auto industry’s U.S. sales to 12.8 million vehicles, its best since 2008.

This year’s show is expected to be notable for debuts of new versions of the Ford Fusion and the Honda Accord, two of the biggest sellers in the family car market.

There also will be the return of the Dodge Dart, the famous Chrysler Group nameplate last offered in 1976. This time it will have an Italian flair. The new Dart is based on the architecture of the Alfa Romeo Giulietta. Italian automaker Fiat owns Alfa Romeo and holds a controlling interest in Chrysler.

Luxury brands also will be making important market and styling statements at the show.

General Motors Co.’s Cadillac division will unveil its new ATS sports sedan — the car it hopes will take on the BMW 3 series, the perennial leader in that market.

Lexus, the luxury arm of Toyota Motor Corp., will show off its LF-LC, a highly styled concept of an advanced hybrid sports coupe.

Designed by Toyota’s Calty Design Research studio in Newport Beach, the car is an example of the new styling direction of Lexus as it tries to put zip back in cars that at times have been criticized for conservative styling.

“This car symbolizes that next step, our passion for automobiles and where we want to go with Lexus.” said Kevin Hunter, president of the design studio. “We want to be more bold.”

He called it “sexy and aggressive” but noted that the vehicle is a design study and that there is no commitment to bring it into production.

“But generally when we make concept cars we make them for a purpose.” Hunter said.

The translation? Consumers might see LF-LC design cues — such as a full glass roof that fully opens over passengers and taillights inspired by a jet engine with its afterburner on — show up in future Lexus cars.

“We are changing,” Hunter said, “and this car represents some of that change that is taking place and where we want to go. It has more exciting proportions. It has a bolder, more interesting design.”

Lincoln, the luxury division of Ford Motor Co., also wants to make a splash at the show. It will reveal a concept vehicle that will signal the styling DNA that the brand plans to weave into future models, starting with a new car that will be revealed sometime this year.

What it plans to show will give consumers a peek at the styling of the seven all-new or restyled vehicles Lincoln is scheduled to introduce over the next three years, said Max Wolff, the brand’s design chief.

“What we need to do is mature Lincoln’s identity,” Wolff said.

That’s important because Lincoln has been seen as a has-been in the luxury market.

“The idea of doing a concept car is like a fashion show,” he said. “It allows us to push the boundaries.”