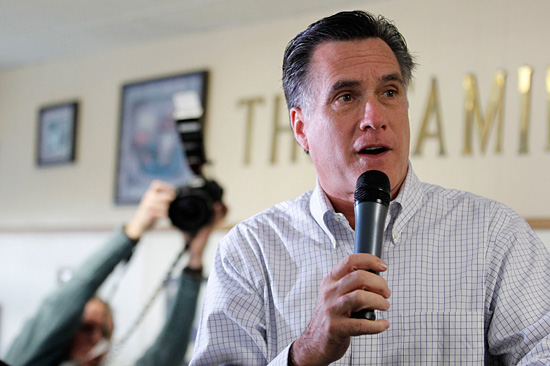 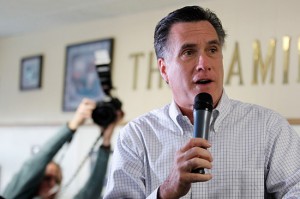 The former Massachusetts governor has spent much of the year as the front-runner to win the Iowa caucuses, watching other candidates ebb and flow in the polls, serenely floating above it all as his rivals savaged one another. And then, just days before the Iowa caucuses, a dark horse candidate popular with the socially conservative voters has caught fire.

The 2012 presidential contest is clearly different from the one four years ago, in which Romney spent an inordinate amount of time and money in Iowa only to be humiliated by a second-place finish to the late-surging Mike Huckabee, the former Arkansas governor.

The question for Romney is whether history will repeat itself — whether on Tuesday, Rick Santorum and his ragtag band of supporters and meager war chest will come from behind to embarrass Romney and his well-oiled, well-funded machine by eclipsing him in the first voting contest in the nation. Romney on Sunday wasn’t ruling out anything, but was forwarding a calm confidence that he will prevail eventually.

“I can’t tell you who’s going to win this thing but I do believe I’m going to have a great deal of support and that will give me the kind of boost I need” going forward, Romney told reporters after speaking at a diner here. “Senator Santorum is a good guy, he’s worked hard. I wouldn’t be surprised if we saw him do well Tuesday night.”

Romney has spent far less time and money in Iowa this year and had kept public expectations fairly low until recently. But as other candidates have fallen by the wayside, Romney has accelerated his campaign here, pounding the pavement across Iowa, greeting voters in greasy spoons, grocery stories and manufacturing plants.

On Sunday, Romney met with voters at the Family Table restaurant in Atlantic and held a rally at a restored Victorian mansion in Council Bluffs. He stuck with his presumptive-nominee script, focusing his criticism on President Barack Obama, and not mentioning his GOP rivals except when asked by reporters.

Romney argued that Obama has been an abject failure in dealing with domestic and foreign threats.

“You know, I’ve been looking at some video clips on YouTube, of President Obama, then candidate Obama, going through Iowa making promises,” Romney told an overflow crowd at the Bayliss Park Hall in Council Bluffs. “The gap between his promises and his performance is the largest I’ve seen since, well, the Kardashian wedding and the promise of ‘Til death do us part.’ ”

His closing argument to voters here previewed what is expected to be his theme in the general election if he wins the nomination — an overt appeal to middle-class Americans reeling from the nation’s economic collapse.

Romney, accompanied by his wife, Ann, and son Craig, kept an optimistic face throughout the day, despite the fact that his prospects were not quite as clear as they were a few weeks ago.