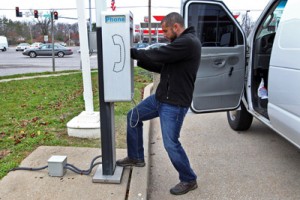 ST. LOUIS — At 62, Jim Nesselhauf is not sure which will come first, retirement or the demise of his business — pay phones.

(Joe Nesselhauf checks the operation on a pay phone that is part of the family’s business in Mehlville, Missouri, on November 23, 2011. With the proliferation of cell phones, the pay phone business is dying out.)

Today, he’s down to about 400. And he expects to soon lay off one of his four remaining employees.

“I’ll be honest with you: It’s a business that’s not going to be around much longer,” Nesselhauf, of south St. Louis County, said recently in an interview. “We’re on the dying end of a category here.”

With cellphones dominating the telecommunications industry, pay phones are disappearing fast. Their numbers nationally plummeted from 2.1 million in 1999 to 550,000 in 2009, the last year the Federal Communications Commission released its “pay phone population” figures.

The major carriers, AT&T and Verizon, have both pulled out of the pay phone business, leaving the market to small, regional companies such as Joltran, which, with Pacific Telemanagement Inc., operates most of the remaining pay phones in this area. Pacific Telemanagement, a California company, did not return calls for this story.

Nesselhauf said another factor had hastened the decline in recent years — the federal Lifeline program which, in 2009, began giving free cellphones and free minutes to people on welfare.

“The bulk of our business is in the inner city, and when the federal government started giving cellphone minutes away, what had been a steady decline really started speeding up,” he said.

Before going into the pay phone business, Nesselhauf had worked as a regional manager at the old National Supermarkets, until the company was sold in 1995.

“We were in the process of closing down everything at National, and a young lady came to my office and left a stack of papers on my desk,” he said.

In the stack, he found the company’s pay phone records.

“I started looking through them and saw that pay phones did super-well back then, about $600 to $800 a month each,” he said.

With retirement money from National and a bank loan, Nesselhauf started Joltran in 1995. (The company moniker is an amalgamation of letters from his name and those of his wife of 40 years and their two daughters.)

Nesselhauf began signing up clients, who would get a percentage of the revenue. In the early years, he worked by himself, seven days a week, sometimes 16 hours a day.

His phones gave him an advantage over those used by the dominant company at the time, Southwestern Bell.

“Mine had modem boards inside that allowed me to communicate with them every day; I knew how much cash was inside, when a handset was missing or a key was stuck. Customers preferred them to Southwestern Bell’s — which we called ‘dumb phones’ — and that really kick-started the business,” he said.

He got successful enough to hire an employee. He eventually had seven people working for him.

A few years ago, Nesselhauf reached his goal of 1,000 pay phones. The most profitable of them brought in about $800 a week.

In 2006, Nesselhauf got a letter from the city of St. Louis. Residents living near one phone had complained that the phone was a magnet for criminal activity. The city ordered Joltran to remove it.

“I had the same thing happen before,” Nesselhauf said. “In all honesty, I was very understanding.”

When a Joltran technician began disconnecting the phone, a familiar scenario ensued.

“A young lady came out and begged him not to take the phone out. She lived right across the street and said she had a sick child and this was her only communication with a doctor,” Nesselhauf said. “All of our techs can tell you heartbreaking stories like that, where people come out of their houses saying, ‘Please don’t take my phone away!’ ”

Nesselhauf wrote to the ward’s alderman, Matt Villa, seeking a reprieve for the phone.
Villa, who was an alderman from 1997 to this year, recalled the incident.

“I was sympathetic to Jim and to that woman,” he said. “But it was obvious to people in the area that the phone was being used to sell drugs and for prostitution.

“I know legitimate calls were also made from the phone, but I think it was the illegal activity that drove the profit.”

Villa offered to let Nesselhauf move the phone inside the gas station.

“But (Nesselhauf) said that once a phone is moved inside, it won’t do enough business to make it worthwhile,” Villa said.

Recently, Joltran got a small boost when Metro renewed its contract with the company to support the 56 phones on the agency’s train platforms, parking lots and bus transfer centers.

Nesselhauf had initially told Metro officials that he would need to remove 30 of the pay phones because they were not generating enough revenue.

Metro Vice President Debbie Erickson said the agency negotiated a deal with Joltran in which it would pay the company a total of $300 a month to support unprofitable phones.

“There was a time when all of our pay phones produced a little commission, but not anymore,” Erickson said. “But we felt that it was a good idea for people to still have access to pay phones at all our locations; even if you have a cellphone, you never know when your battery is going to run out. So we will pay a little something just to cover (Joltran’s) costs on some phones.”

The best of Joltran’s phones now take in about $150 a month, and only a few do that.
Joltran has removed about 140 phones this year.

The company is now heading into its roughest time of year, when cold weather deters calls at outside phones.

Nesselhauf wonders how long he can hold out before the last line goes dead.