At FedEx, no elves but plenty of workers and tech to move gifts 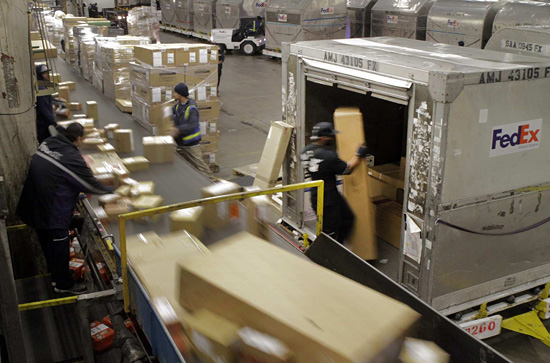 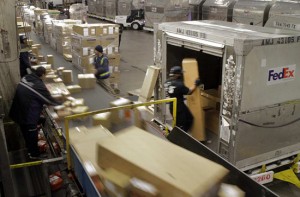 (PHOTO: Packages are sorted at the LAX FedEx facility on December 12, 2011, in Los Angeles, California.)

What FedEx Corp. said was its busiest day of the year came Monday, when the carrier moved about 17 million packages nationwide.

How do you handle that many boxes and parcels? At the FedEx hub at Los Angeles International Airport, it takes hundreds of human handlers and miles of automated conveyor belts.

At 1 a.m. Monday, the heart of what’s known as “the a.m. sort,” a dozen cargo planes emblazoned with the purple-and-orange FedEx logo, mostly Boeing MD 10s and Airbuses, sat on the tarmac. The aircraft were stuffed with tens of thousands of packages waiting to be unloaded, sorted and moved along to their next destination in the logistics chain.

The rush started as soon as the planes touched down and doors swung open. Inside were dozens of sealed steel shipping containers loaded with parcels that loading crews placed on carts to pull inside the massive sorting warehouse.

Santa Claus might have pointy-eared elves doing his bidding, but FedEx has plenty of its own high-tech helpers, including a fast-moving system of chutes, ladders and scanners.

Inside the LAX hub, packages containing honey-baked hams, laptop computers and flowers were pulled from the steel containers by workers onto conveyor belts that moved them briskly through the tightly choreographed system. Within a few hours, all that cargo had begun the journey to smaller sorting stations around the Los Angeles basin.

To prepare for the holiday rush, FedEx hired 20,000 seasonal workers, about 900 of them in Southern California. And there’s plenty of overtime for full-time employees such as Jerry Negrete.

“The extra hours pay off,” said Negrete, a senior trace agent from Inglewood, Calif. A 17-year employee, part of his job is investigating where parcels with lost address labels go. “I look forward to this every year, especially since my wife and I are buying gifts for all the kids in my family.”

As the sorting got underway early Monday morning during a chilly drizzle, hub administrative manager Steve Hornstra, who started as a handler 23 years ago, prepared for one of the longest workdays of the year.

“Here, you can tell when people are in the shopping spirit,” Hornstra said, motioning from a deck to the half dozen conveyor belts filled with packages below. “FedEx is a good barometer of the economy.”

FedEx will ship about 260 million packages between Thanksgiving and Christmas this year, up 12 percent from 2010.

Like FedEx, other shipping companies are reporting similar surges in shipping volume.

The U.S. Postal Service will open some offices Sunday. Between Thanksgiving and Christmas, people will send almost 17 billion letters and packages.

With couriers such as FedEx investing heavily in technology, a single package gets scanned about a dozen times, its every movement internally tracked. Scanning checkpoints along conveyor belts don’t just read addresses. They also measure packages. That’s crucial information when workers — guided by computers — place crates filled with packages into every single inch of space available in a plane.

Even with crews hustling along thousands of parcels at a frenetic speed, packages rarely get lost, operations manager Hornstra said.