Attorney says Sandusky faces ‘the game of his life’ 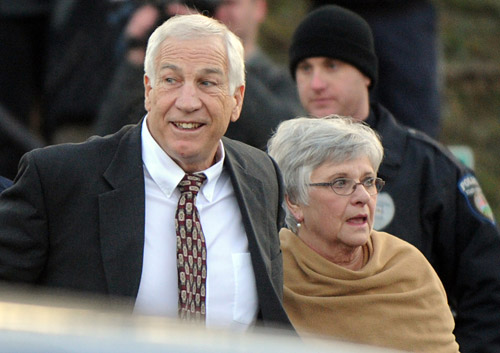 BELLEFONTE, Pa. — Former Penn State football coach Jerry Sandusky now will have to build the most important defense strategy of his life.

Sandusky waived his right to a preliminary hearing Tuesday on 52 counts of child sex abuse and will prepare for a trial next year. His attorney called the move a “tactical measure,” and vigorously maintained his client’s innocence.

“This is the fight of Jerry Sandusky’s life,” his attorney, Joe Amendola, told a throng of reporters gathered outside the Centre County Courthouse. “This goes beyond the Penn State-Miami game in 1986. This is the game of his life.”

Centre County and court officials had expected Sandusky’s preliminary to be a marathon event. Streets around the courthouse were teeming with news trucks and reporters, and the courtroom was filled when Sandusky, 67, walked in a few minutes before 8 a.m., accompanied by his attorney. His wife, Dorothy, four of their children and former Second Mile participants sat in front-row benches in a show of support.

But after a brief conference with prosecutors and Amendola, Senior District Judge Robert E. Scott announced that Sandusky had decided to forgo the hearing.

Amendola said the decision was made the night before, but Sandusky could have changed his mind anytime before the hearing began.

Prosecutors with the state Attorney General’s Office and Amendola all said there had been no discussion of a plea deal.

Prosecutors said they had “about 11” witnesses ready to testify Tuesday. One of them was Mike McQueary, who previously told a grand jury that he witnessed Sandusky sexually assault a young boy in a Penn State locker room shower in 2002.

As he left the courthouse at about 8:35 a.m., Sandusky turned to a crowd of reporters and said he and Amendola “fully expect to put together the best defense” they can for the trial.

“We couldn’t do that today,” said Sandusky. He took no further questions, and quickly walked away and got into Amendola’s BMW.

As a procedural formality, Sandusky waived his formal arraignment, which was scheduled for January, pleaded not guilty and requested a jury trial. Amendola said Sandusky is expected in court next for a pre-trial conference with a judge, possibly late March or April.

The decision to waive the hearing spared Sandusky’s family, and about a dozen or so other supporters, from hearing out loud the allegations from his accusers — men who told a grand jury that when they were boys Sandusky befriended them, gave them gifts, then initiated physical, and sometimes sexual, contact.

Prosecutors said it also spared the alleged victims from having to once again testify.

“This development, we believe, provides maximum protection to, most importantly, the victims in this case,” said Marc Costanzo, a senior deputy attorney general. “It avoids their having to testify for a second time.”

Amendola said Sandusky’s decision to waive his right to a hearing was a “close call,” and he pointed to several reasons to support it.

For one, Amendola indicated the witnesses’ testimony could have been damaging to Sandusky in the court of public opinion.

Amendola would have been able to question the witnesses, but would not have been allowed to attack their credibility.

“All that would have done is reaffirm what many of you already think, that Jerry Sandusky is guilty and that he committed these offenses,” Amendola said. “And I thought that could have been a very unfair position, especially with all the coverage that there would have been concerning this hearing.”

Amendola said prosecutors also agreed to concessions as part of the waiver: If Sandusky is charged with more offenses, he can turn himself in rather than be arrested. Bail would also remain the same, and Amendola can get access to the discovery process quicker.

Some attorneys representing the alleged victims said their clients were prepared to testify Tuesday.

“I can imagine this is terrific for my client as well as all of the other victims who now do not to have to relive the horrors that they experienced up on the witness stand,” said Michael Boni, who’s representing the 18-year-old from Clinton County who’s identified as Victim 1 in the grand jury presentment. “And they have achieved the same result as they would have had they had to testify.”

Harrisburg attorney Ben Andreozzi said his client, identified as Victim 4, was angered over the last-minute waiver but is still resolute.

“Regardless of the decision to waive the hearing, nothing is changed. I still will stand my ground, testify and speak the truth,” Andreozzi read from a statement his client had written.

The man responsible for the moniker “Linebacker U,” Sandusky and his defense helped guide the Nittany Lions to a 1986 national title when they upset the top-ranked Hurricanes in the 1987 Fiesta Bowl. He also has been honored as the founder of The Second Mile charity for at-risk youth. But the admiration the community had for Sandusky has been replaced by furor over the allegations that he molested 10 boys over 15 years.

In the most explosive allegation, McQueary testified to the grand jury he saw Sandusky rape a young boy in a Penn State shower in 2002. That alleged incident led to perjury and failure to report charges against former athletic director Tim Curley and Gary Schultz, who was the senior vice president for finance and business and oversaw university police.

But conflicting reports of what McQueary said about that incident have surfaced in recent weeks.

Amendola said he was ready to cross-examine McQueary during the hearing, but said Tuesday that McQueary is already facing questions in the court of public opinion.

“We have enough inconsistencies at this point to totally wipe him off of our case,” Amendola said. “He was the commonwealth’s centerpiece. To the extent we destroy his credibility, I think we put everybody else’s credibility into question in this case.”

Prosecutors wouldn’t say who, other than McQueary, was scheduled to testify Tuesday. In addition to Boni’s and Andreozzi’s clients, Howard Janet, the attorney representing the person identified as Victim 6 by the grand jury, said his client also was slated to testify.

“If you look at the presentment, you could pretty much figure out the lineup of witnesses pretty easily,” Costanzo said.

John McGettigan, the prosecuting attorney on the case, declined to comment following the hearing.

During his press conference, Amendola announced that Cumberland County attorney, Karl Rominger, has joined him in Sandusky’s trial defense preparation.

Sandusky remains on house arrest as part of the $250,000 bail he posted after his arrest last week. He’s also wearing an electronic monitoring device.

Curley and Schultz are scheduled for a preliminary hearing on Friday in Harrisburg.