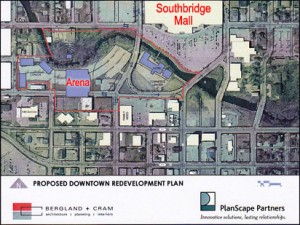 MASON CITY – A committee to study the feasibility of a possible multi-purpose arena for downtown Mason City has been formed. The committee consists of city staff and was formed after direction from the city council.

According to a memo to the mayor and city council, Trout said “city staff will begin a process over the next couple of months to complete their research regarding the feasibility of the construction and operation of a multi-purpose center in Mason City.”

Trout said that the committee’s efforts will be focused on “the costs to construct a center and to operate the center” and that the committee would not be researching the type of center or a location for it. He said that a task force previously put together had already made those recommendations and those decisions would be made later.

Trout also said that city staff would be traveling to the Twins Cities area to on October 26th and October 27th to conduct research.

“The Twin Cities area has many types of arenas that fulfill similar purposes for their communities. We will visit several facilities similar to the proposed arena and ask questions and receive information about the construction costs of their facilities and their operation costs.”

Further, Trout stated that staff will visit with an architectural firm out of Minneapolis, JLG Architects, “regarding expected building costs for our facility.”

After all that information is gathered, Trout said, the next step would be to “meet with all local architects and discuss the project with them.” Trout wants to have that completed by November 15, 2011.

Finally, a report will be made to the city council regarding all the information the committee has gathered regarding the construction costs, operating costs, funding sources, recommended programs that should be offered, and a description of events that could be offered at a multi-purpose center. Trout wants to present that report by mid-December.

“The decision to move forward … would be a major item in the city council priorities for the coming year.”