MASON CITY – Stream of Consciousness, commonly referred to as S.O.C, is a new rock/blues band out of Mason City. The name itself says a lot about the bands mission. Their goal is to create live music experiences where anything can happen. A mixture of professionally trained musicians and self taught garage rockers has created a band that is hard to label.

What kind of music does S.O.C play? “Good music” says singer and guitar player Mike Dunn. “We rely on improv to keep things interesting and real.” It is quoted in the song “Habaneras” off the band’s LP “The Perfect Score” written by Matt Jensen. “Music from the heart is what I observe, fake it and I will know.” There is no faking at an S.O.C show.

Among the venues Stream of Consciousness has performed at are Lorado’s in downtown Mason City, Tiki Bar in Clear Lake and Jake’s Place in Plymouth.

Mike is a self taught guitar player, singer and songwriter for SOC. He was born and raised in Mason City. His earliest memories in life all revolved around music. Bluegrass music was in the family, with his father being an accomplished banjo player. His first band was The Todd Street Session, with fellow SOC member Lee Brockney in 2003. Mike is an Operations Manager at IC System.

Matt has been a charter member since its inception. In addition to supplying the many keyboard tones to the music of SOC, Matthew contributes vocals to many songs as well as composes both music and lyrics for the group’s original repertoire. A classical trained pianist and singer, Matthew has studied music performance at Wartburg College and the University of Illinois at Urbana-Champaign. Favorite artists/groups include: The Zombies, The Kinks, The Beach Boys, Harry Nilsson, and Van Morrison.

Lee is 28 Years old and is originally from Mason City. Lee lived in Minneapolis for 3 Years and moved back in 2009. He is married with 2 Daughters, Sydnee (8) and Addison (3), and a Son Jack who is due in March
Lee’s main guitar is a Jaros Custom Semi-Hollow body. His musical idols are: Phish, Grateful Dead, Eric Clapton, Pink Floyd, Widespread Panic.

Chris is 33 and is the drummer in the band. Chris has been playing drums since growing up in Buffalo Center, IA. Chris attended Music Tech in Minneapolis MN. While attending Music Tech he studied under many incredible drummers including Gordy Knutson of the Steve Miller band. While living in Minneapolis Chris played in several local bands in and around the Twin Cities area. It was almost ten years later that Lee Brockney approached him about playing in a new rock band in Mason City. Having missed the excitement of playing gigs, and hanging with band members he decided to give it a go. The SOC band has been one of the most rewarding experiences in his career. Chris is currently employed at IC System in Mason City. Chris is married with one child. 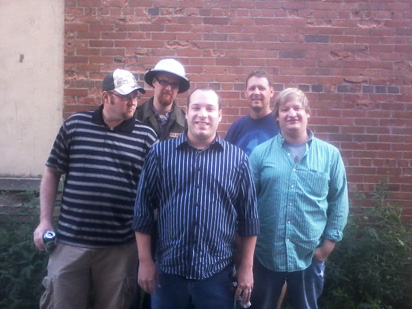