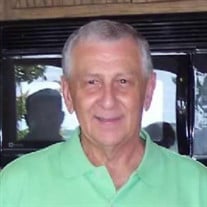 Robert was born on May 19, 1934, in Brooklyn, Iowa to parents Raymond and Rose LaKose. He attended country school in the Brooklyn area and began working as a grocer as a teenager. He met his future wife Joyce at a grocery store, as she had moved to the area to teach. The two were married in Brooklyn in 1956, and Robert was drafted into the United States Army shortly afterward.

Robert served in the Army from 1956 to 1958, stationed in Germany. He returned stateside and continued his career as a grocer, working in Toledo, Colfax, Newton, and finally moving to Clear Lake in 1973. He managed Easter’s Grocery in Clear Lake until his retirement in 1994. Following his retirement, he and Joyce were antique dealers, working at an antique shop in Mason City for a period of that time.

Robert was dedicated to maintaining a pristine lawn and an avid baker.

He is preceded in death by his parents.